"When the call to war came, it was the common smiths who first raised their weapons in answer." - The Study of Arms

Flail (フレイル, Fureiru?), also known as Iron Flail and Iron Hammer, is a recurring weapon in the series. It is often a powerful weapon when first obtained, but is quickly surpassed by others. It is often found around the beginning of the game to about the quarter point. It has appeared as various tyoes of weapons: a staff, nunchaku, and hammer. More often than not, it allows the user to deal full damage from the back row, and is usually equippable by White Mages or other spellcasting classes.

The Flail is a low-level staff that provides 13 Attack and a Hit Rate of 16 and allows the user to attack from the back row. It can be used by Freelancers, White Mages, Red Mages, Oracles, Chemists, and Mimes. It can be bought in Karnak for 780 gil and stolen from Atomos.

Even a weakling can cause serious damage with this type of Nunchaku but they're also hard to use. This Flail has long been a favorite for beginners.

The Flail is Selphie's starting weapon, and if desired, can be acquired at a junk shop by using M-Stone Piece x2, a Bomb Fragment and 100 gil. It provides 12 Attack and 98 Hit rate.

The weapon called "Iron Hammer" in English, is called "Flail" in the Japanese version. In the original version, it is the weakest hammer, providing 53 Attack, 2 Evade, 32 CT, and 7% Combo Rate. It requires the Axes & Hammers 1 License to equip, and can be bought for 3,300 gil at Rabanastre and Tomb of Raithwall, stolen from Hybrid Gator (3% chance), and found at Tomb of Raithwall (Southfall Passage) or Zertinan Caverns (Sandfalls).

In the Zodiac versions, it now provides 24 Attack, 2 Evade, 32 CT, and 8% Combo Rate, and requires the Axes & Hammers 2 License for 25 LP. It can be bought for 900 gil at Rabanastre, Nalbina Fortress, and Barheim Passage, and found at Barheim Passage (The Zeviah Subterrane).

A weapon comprised of a large iron head attached to a long wooden handle.

The Iron Flail is available to purchase from Chapter 2 for 1,200 gil and provides 9 Attack.

Iron Hammer is the weakest hammer, providing 28 Attack and 5 Resistance. It teaches Pickpocket to the Viking for 250 AP and Protect to the Green Mage for 150 AP. It can be obtained from the Bazaar from the "Solid Hammers E" category.

Chain has a whip icon before its name. The Chain is found inside Kett. It has an attack power of 10. 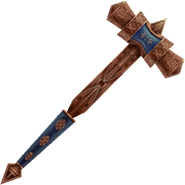 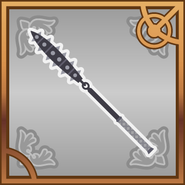 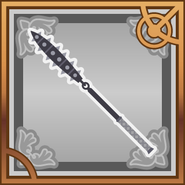 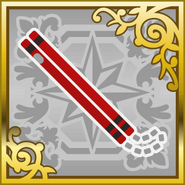 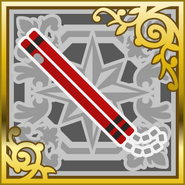