Trio of dice that deal more damage the higher they roll.

The Fixed Dice (イカサマのダイス, Ikasama no Daisu?) is a recurring weapon and item in the Final Fantasy series.

Fixed Dice is a weapon that only Setzer can equip. It has an attack power of 1, and can be found in Kefka's Tower.

The Fixed Dice is a ranged weapon that ignores defense, the Master's Scroll damage penalty, and all other factors that normally determine damage. The numbers 1, 2, 3, and 4 have a 3/16 chance of appearing, while 5 and 6 have a 1/8 chance (on the first two dice only; the third one has 1/6 chance for each digit).

When used, three dice are thrown at the opponent, and the damage dealt is equal to the product of all three rolls multiplied by Setzer's level, then doubled. If all dice rolls are the same, the damage is multiplied again by one of those rolls. If Setzer is berserked, the damage is boosted by 50%.

Loaded dice. Remember: it's not nice to cheat.

Loaded Dice is a mission item that provides a 9% Attack bonus when brought into battle.

Loaded Dice is an item that increases Strength by 2.

Fixed Dice is a thrown weapon.

The Fixed Dice is also mentioned in the Mognet letter sent by Kathy, who tells the player of their luck for the day. The Fixed Dice seems to be the player's lucky weapon for the day, but equipping it doesn't mean the character's Luck would increase.

A set of gambling dice from a distant world. They can also be used on the battlefield to amplify any damage dealt to enemies. If good fortune is with the wearer, a big roll could lead to immense amounts of damage inflicted upon his or her foes. Apparently, these fixed dice once belonged to an elegant gambler from another world who favored thrills and romance beyond all the money in the world.

Fixed Dice is a Throwing weapon obtained as Setzer's Trust Master. It provides 1 ATK, +10% Accuracy, requires both hands to wield, and has a damage range of 120-650%. In the Japanese release, the weapon was nerfed. 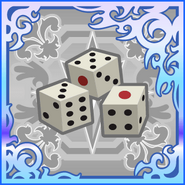 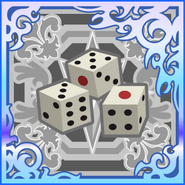 [view · edit · purge]A loaded die is a die whose weight distribution has been altered getting it to land more often on a specific side.