Disciple of the Land

To catch the fish you want, you must first know what the fish wants. Only once their prize is at stake can you tantalize and tempt your prey to taste the forbidden tackle.

The Fisher is a Disciple of the Land in Final Fantasy XIV that performs fishing, a form of gathering.

Fishers are the harvesters of the realm's marine and freshwater animal resources.
The trade rose to prominence in the nation of Limsa Lominsa, owing to the plentiful waters upon and around Vylbrand island. Be it from the shore of a sea, the bank of a river, or the deck of a boat, Eorzea's anglers must constantly account for a wide range of factors to optimize their success, including season, time, place, tools, and bait.

Fishers, as their name suggests, harvest the realm's vast marine and freshwater animal resources. The goods they obtain from their catch place them in direct dealings with both Culinarians and Goldsmiths. Fishers desire to catch bigger fish than their last. This desire is what drives them to conquer perilous environments, just to find desirable fishing holes, be it on or offshore, above or below ground.

Fishers use fishing rods as their primary tool and spearfishing gigs as their secondary. Their armor is primarily made up of "Gathering" gear that they share with other disciples of the land. Gathering gear provides bonuses to the gathering, perception, and GP attributes. The Gathering and perception attributes respectively improve the chance of successfully gathering an item and the chance of receiving a high quality version of said item. GP is the resource they use in place of MP for their abilities.

Prior to Final Fantasy XIV: Heavensward, Fishers did not use GP for any of their abilities. 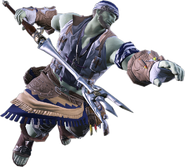