The oily surface of this scale gives off a peculiar sheen. Both the scale and its oil are known to find buyers at market.

The Fish Scale (魚のウロコ, Sakana no Uroko?), also known as Fish Fin, is a recurring, single-use item in the Final Fantasy series that frequently is used to cause some form of water damage to one or more targets.

The Fish Fin is a Guardian Force-affinity boost item. It can also be used for refining.

Deals water damage to an enemy.

Fish Scale is an item for the Use command. Four can be used to customize the ability Waterstrike onto a weapon.

Fish Scale is loot that can be acquired from Danbania, Bull Danbania, Ichthon, Apsara, Rain Dancer, and Razorfin. Two may be sold toward unlocking the Marksman's Delight at the Bazaar. A Fish Scale may be sold for 151 gil.

The scales of a slow-moving fish. They can be caught by hand.

Fish Scale and Delicious Fish Scale are trade accessories. Their names and descriptions refer to Final Fantasy VI when Celes had to catch fish to nurse Cid back to health.

A scale left behind by a creature of the deep. The power it harbors within is enough to deal a modest amount of water damage to a foe. With some scales shimmering with resplendent colors, they are prizes as ornaments as much as for their role in battle. Sadly, one cannot have it both ways, as releasing the scale's power will leave it a ashen husk. 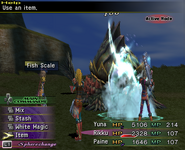