First Strike (せんせいこうげき, Sensei Kōgeki?) or (さきがけ, Sakigake?), also known as Initiative, Preemptive Strike, Surprise, Preemptiv or Hamedo (ハメドる, Hamedoru?), is a recurring support ability in the series. Most often it either increases the chance of a preemptive battle, letting the party attack before the enemies, or lets the equipped character always get the first turn in battle.

First Strike (also called Preemptiv) is the level 3 Ninja class ability, learned for 50 ABP and known by them innately. It boosts the chance for a preemptive strike from 32/256 to 64/256.

First Strike is an ability found in the Gale Hairpin, which raises the rate of preemptive attacks.

A level 5 Pre-Emptive Materia also halves the chance of getting the Ambush and Back Attack special formations, but only when the Materia is on the third (last) party member.

First Strike is a

Complete Materia that allows the user to enter a battle with their ATB gauge slightly filled, depending on the materia's level. It can be purchased from Chadley for a cheap 100 gil after completing Battle Intel Report 3. After purchasing it once for the discounted price, the player can buy another copy for the full 5000 gil price. However, the effect does not stack.

Guardian Forces Pandemona, Cactuar, and Tonberry learn the Initiative ability for 160 AP. Junctioning it to a character allows them to start battles with a full ATB gauge, regardless of situation. It can be especially useful for Quistis to immediately use Degenerator.

Freya can learn the Initiative support ability from Obelisk and Battle Boots. It takes 95 AP and takes 5 Magic Stones to equip. It boosts the party's chance to get a preemptive strike from from 16/256 to 85/256.

First Strike can be customized to any weapon, if it does not start with it, by the use of a Return Sphere. Auron's Celestial Weapon, the Masamune, has First Strike when fully upgraded. With the use of a turn-based battle system, having First Strike guarantees the character will have the first turn even if the battle is an ambush. The ability is nullified if the battle begins with a preemptive strike, with the player with the highest agility taking the first turn.

Certain enemies have a First Strike type-ability, where they will always have the first turn, regardless of ambush, preemptive, or a player's character's First Strike. Varuna will always open the battle with Haste, and Kottos will always open the battle by switching into its counter status, signified by the raising of its fists. Similarly, Great Malboro enemies fought in the Omega Ruins will always ambush the player using Bad Breath on their first turn, but a player's First Strike ability precedes this and doesn't function in the same way as the aforementioned enemies.

The Thief's Initiative ability costs 60 AP to learn and increases the chance of preemptive battle.

The accessory Sprint Shoes, the Garment Grids Mounted Assault and Highroad Winds, and the Thief dressphere grant the First Strike ability, which allows the user to start the battle with full ATB.

The passive ability First Strike fully charges the ATB gauge prior to battle. This is obtained by equipping the Aurora Scarf.

First Strike is an passive ability exclusive to Paradigm Pack monsters that fully charges ATB gauge before battle. It can be used by Yeoman, Chelicerata, Clematis, Deathgaze, Pantopoda, Oannes, Yakshini, and Ultros.

First Strike is a reaction ability the Monk class learns for 1,200 JP (1300 JP in The War of the Lions). It functions like Counter, but rather than attacking after being hit, the unit using First Strike attacks the enemy preemptively and cancels the enemy's hit.

The ability's success rate is determined by the character's Bravery level and will work against all uses of the Attack command by units in the character's attack range. This means that monster abilities will not trigger First Strike unless they are under Frog status, but ranged strikes will, if the character is equipped with a similar weapon.

Surprise is a passive ability that has infinite uses. It also increases a Robot's HP by 9. This ability boosts the chance of having a "Strike First" at the beginning of battle. It can be used by Ant Lion, BlackCat, Boulder, Cancer, CatWoman, Cocatris, Commando, Earth, Killer, Mantis, Mosquito, Ninja, Plague, Pudding, Rakshasa, Roc, Rock, SabreCat, SandWorm, Serpent, SlimeGod, SnowCat, Tororo, WereWolf, and OdinCrow.

First Strike is learned at level 67. When a character with First Strike lands the first hit in battle, all hits in the combo are critical hits. Its base CP cost is 40 and requires 360 AP to master.

First Strike is a passive ability that raises the odds of a preemptive strike. It can be used by Fenrir, Magitek Armor P, Magna Roader (Purple), Mimic, Mu, Mega Nightsqual, Nightsqual, Red Cap, and Searcher.

Initiative is a passive ability that occasionally bestows Haste at start of battle. It can be used by Hyperion.

In Dead Fantasy II, Rikku uses the First Strike move to knock the Dead or Alive girls after Tifa beats them one by one with several of her Limit Breaks while they are in a Stop state allowing Yuna to take them down with her Trigger Happy in explosion. 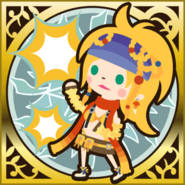