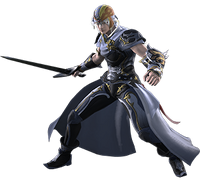 Firion's outfit is available as a veteran reward for players who have subscribed for a total amount of 840 days. Upon subscribing for 960 days, the player receives a Wind-Up Firion minion, as well as a Chocobo Barding based on Firion's outfit. 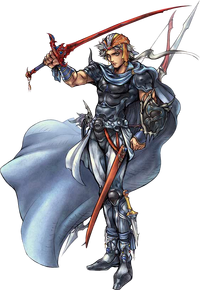 Firion appears as a Warrior of Cosmos and stands as the hero representing Final Fantasy II, opposing the Emperor.

Firion travels with Cloud, Cecil and Tidus. As the three each go their separate ways to fight their personal battles, Firion begins to question his reason for fighting. His one true desire is to end the war and create a peaceful world free from tyranny and oppression. Firion carries a wild rose with him, his wish to see them bloom freely a symbol of the world he hopes to see. During the game, various other characters learn of Firion's dream and share his hope for a peaceful future, including Cosmos herself.

His alternate outfit is based on an alternate art by Yoshitaka Amano, giving him a different hairstyle and differently styled armor with a red cape.

Firion travels with Kain but is struck down by him, unaware Kain is incapacitating his comrades to save them from the manikins. In a series of flashbacks viewed in the Reports, Firion discusses his rose with Lightning when she finds it, and the two tell the other it stirs memories in them. Lightning returns the rose to Firion, but requests he let her have it when he recovers all his memories so her own recollections will be easier.

Firion's second alternate is based on another Amano design, giving him different armor, longer hair, and a purple cape.

Firion is a playable character and a representative of Final Fantasy II. He is classified as a Vanguard-type character. He can chain his Bravery attacks freely for a variety of combos. He retains his weakness of having poor aerial attacks; however, he can cover both long and close-range on the ground due to a variety of area-of-effect attacks.

His EX Skill is Blood Weapon, which increases his own movement speed and enables his attacks to absorb HP. 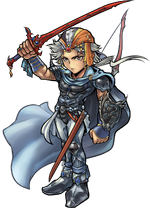 Firion appears as a playable character. He can be recruited during Chapter 5, by clearing "Straw Blooming Grassland 2". He has an Attacker role, and wields Sword-type weapons. As regards his abilities, he uses "Blood Sword" to deal damage on his foes and recover his own HP, and "Absorb Sword" to deal a ranged BRV attack.

A member of the rebel army standing against the Palamecian Empire, which would dominate the entire world. When he is gravely injured during the Empire's assault on the Kingdom of Fynn, Firion is rescued by rebels and his life preserved. Ever believing that peace still waits beyond all the war and strife, he aims for Palamecia and the empire's stronghold with his comrades.

Firion is a default playable character. He is based on his Dissidia design, though he only wields the Blood Sword. Firion strongest stats lie in his strength and agility, though his abilities mostly prioritize defense. He is a great choice for players who want both a strong and fast character to tackle Dark Notes, while his Limit require precision from advanced players.

His Limit, Blood Weapon, restores the party's HP every time they get a Good or better on notes after achieving a 50-chain in battle.

Firion is a default playable character. If the player did not select him among their party of four, he can later be unlocked by collecting Indigo Shards.

With his agility significantly reduced, Firion prioritizes stamina and keeping the party strong is field stages. Although he gains several abilities that can boost his strength and agility, they limit his versatility and defensive front. Nonetheless, players must decide whether to boost Firion's already good strength, or to further strengthen his stamina capabilities.

Firion is one of the 28 default playable characters.

His limit, Blood Weapon, activates only when boss-type enemies appear, and deals damage in direct proportion to his Strength.

Firion appears as a playable character.

Orphaned at a young age and raised, with Guy, by Maria's parents. The three grew up as siblings. A talented leader, he is training as a Resistance soldier.

Firion appears as a Legend, and can use his Lord of Arms ability.

This youth has little love for the Empire, and even less for the Lamia Queen.

Firion is an exclusive character only available from the Premium Character Shop as a random downloadable content, he uses the Glow Attack during battle.

Firion is a playable character who could initially be recruited during the Special Event Forbidden Treasure as the First Time Reward for completing the Normal stage of the event's fourth phase. He was also available via Seer of Destiny as well as Thorns of the Rose, where in each event he was the First Time Reward for completing Semitt Falls Cavern on its primary track. 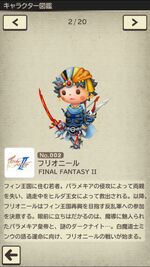 Firion appears as a summonable vision and optional playable character. A 3-6★ Rare Summon, his job is listed as Warrior, and his role is Physical Damage. He originally could awaken only up to 5★, but received a new form for the Final Fantasy II event The Dreadnought. His Trust Master reward is the passive ability Equip H Armor, which enables the equipped unit to use heavy armor. 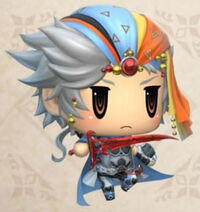 Notes: Bandana / Red sword / Wild Rose / May have been a Champion in the past

The Mysterious Warrior
He was a member of the resistance movement against the Bahamutian Army before Reynn and Lann had awoken in Grymoire. As many had been fooled into thinking the Bahamutians were saviors, Grymoire may have suffered an even greater catastrophe were it not for the work of resistance fighters such as he.

Firion appears with mainly fire-elemental cards, although his Dissidia artwork card is Shine-elemental. His cards depict his Yoshitaka Amano artwork, his artwork from Final Fantasy I & II: Dawn of Souls, and his appearance from Theatrhythm Final Fantasy.

Firion appears as an opponent and on Triple Triad cards in the version available via the Final Fantasy Portal App. On Easy he uses the rule All Open. On Normal he uses Three Open and Swap. On Hard he uses Plus and Swap and the rare five star cards of himself and the Emperor can be won from him, among others. He uses the trade rule One.

Firion appears as part of the 2018 Final Fantasy collaboration.