Resolute Rebel C.
Add a photo to this gallery 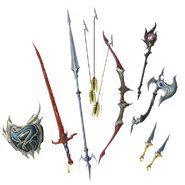 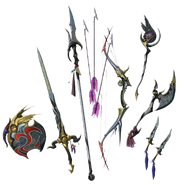 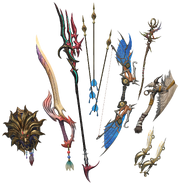 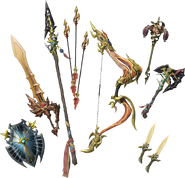 Firion's Weapon Pack IV.
Add a photo to this gallery

Their battle releases enough energy to create a gateway, but planesgorgers descend upon the battlefield and bar access to it. Firion is subdued by Kefka and blasted toward another portal. A hand pulls him in, transporting him to Besaid.

Firion reunites with Tidus and, having lost sight of Shantotto, is accompanied by Jecht as they continue their struggle against Exdeath, Kefka, and Ultimecia. The three prevail and the villains flee as the planesgorgers again plight the battlefield, and Jecht allows Firion and Tidus to escape back to Materia's domain. Later, Firion assists in the clash to awaken the dragon god Shinryu responsible for the planesgorgers by directing an assault against the Emperor that distracts him from Zidane and the Onion Knight. Firion aids in the fight to defeat Shinryu, and with the dragon eliminated, Firion departs the realm with the other warriors, leaving behind a crystal imbued with his essence for Materia to use in his place.

up or down with the Bravery attack button weaves his abilities into one another seamlessly, and each input has its own unique Bravery attack animation.
EX Skill: Blood Weapon - Increases movement speed and causes attacks to absorb HP.

Firion is a Vanguard-type character whose followup mechanic from Dissidia 012 has been reworked; his Bravery attacks can be freely input three times in sequence for a variety of combinations (e.g. neutral>forward>back or forward>back>neutral and so on). Knowing which version of any specific Bravery attack input to use in the attack string is vital to knowing how to effectively control Firion's versatility.

He has poor aerial attacks, which makes him a difficult character to use in scenarios/stages that involve prolonged aerial combat. His EX Skill is situational. He can cover both long and close-range on the ground due to a variety of area-of-effect attacks, and can force his targets to expend too much of their dashing meter to stay airborne by controlling space on the ground.

His latest update gives him a brand new HP Attack (Crown of Arms) that replaces his Riposte, including the return of his Shield Bash redone into a midair forward Bravery attack; working as a decent gap-closer. Along with tweaks to Plummet and an overall damage increase on Swordslash, Firion's air game—while still subpar—is more manageable. He has had many of his Bravery Attacks re-tweaked, especially giving them all faster startup. However, they are nerfed via either decreased amount of hits or damage (one or the other), as well as decreasing their dash cancel-windows if they are whiffed and less vertical tracking.

Another issue his update has addressed is his EX Skill, which now allows him to share a percentage of his stolen HP to any nearby allies within a certain range. 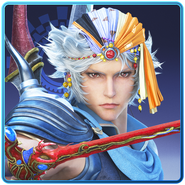 Firion alongside the other 14 main characters.
Add a photo to this gallery
Dissidia Final Fantasy NT characters
Retrieved from "https://finalfantasy.fandom.com/wiki/Firion/Dissidia_NT?oldid=3288457"
Community content is available under CC-BY-SA unless otherwise noted.