A young warrior skilled in many types of weaponry. He is hot-blooded, with a strong sense of duty.

Firion is one of the heroes fighting for the side of Cosmos in Dissidia Final Fantasy. He is a young man skillful in armed combat, including swords, lances, bows, knives, and staffs. He has a passionate soul and an unshakable sense of justice. Firion is one of the most passionate of the heroes, fighting for a world "where wild roses can bloom freely", symbolizing a world free from war and tyranny. His dream of a free world stands in opposition to the desires of his adversary, the Emperor, who wishes to control the world.

Firion's original outfit is based on Yoshitaka Amano's artwork from Final Fantasy II, depicting him with black and blue armor with a blue cape. He has silver hair covered by a blue, orange and white bandana, and carries with him a wild rose as a reminder of his dream. Firion carries with him six different weapons and is skilled in unarmed combat, representing his mastery of the seven attack classes of Final Fantasy II: sword, axe, bow, staff, dagger, lance, and barehanded. He also carries with him a shield based on the shield used by his comrade Minwu. Firion's alternate outfit is based on an alternate artwork by Amano that depicts him with a red cape, a different haircut and bandana, and recolored armor. His Crystal is bright pink shard.

At the beginning of the game, Firion is accompanied by Cecil, Cloud, and Tidus. As the four search for their Crystals, Cloud questions why his companions fight. Firion doesn't respond, and attempts to think of a way to explain it to Cloud properly. Later, Firion shows Cloud the wild rose he carries with him, explaining his dream to see a world where they bloom freely, and vows to end the fighting to see that world come true. Wishing to understand the strength given to him by his dream, Cloud requests a battle with Firion. Though Firion is defeated, he attempts to keep fighting, and Cloud compliments him on his ability. Not long after, Cloud departs to travel on his own and find his own reason to fight.

Continuing their journey, Firion learns more about his companions' reasons for fighting: Tidus fights to settle his grudge with his father Jecht, while Cecil struggles with his complex relationship with his brother Golbez. When Golbez offers Cecil assistance, Firion warns Cecil that despite their bond Golbez is still aligned with Chaos, and his desire to help Cecil may be a trap. Despite Firion's words, Cecil still continues to ponder what Golbez has told him, and Tidus later convinces him to go see Golbez. Firion accepts Cecil's decision and questions Tidus' bond with Jecht, though Tidus claims his desire is to defeat Jecht.

As the two continue on, Tidus asks Firion what his dream is, but Firion says he hasn't thought of such a thing and is focused on ending the war. At this time, a flashback is shown of Firion discovering his rose some time ago, having been placed there by Golbez for him to find. As the enemies before them grow more numerous, Firion and Tidus split up to rendezvous later. On the Lunar Subterrane, Firion meets Jecht, having been blocked from fighting Tidus by the Emperor. Firion accuses Jecht of running from Tidus, and the irritated Jecht attacks him to relieve his frustrations. Firion is victorious but Jecht urges him to keep fighting. Firion refuses, telling Jecht he isn't Tidus' substitute, and Jecht leaves to confront the Emperor with his meddling. Tidus finds Firion not long after, and Tidus tells Firion that the Emperor spoke to him about his desire to fight Jecht, but as with Golbez Firion tells Tidus not to trust him.

The two come across Jecht confronting the Emperor, the two locked in battle. The Emperor vanishes while Jecht limps off, wounded. Tidus tells Firion he is going to pursue Jecht alone, and Firion gives him a potion to use on his journey. Tidus runs after Jecht, and the Emperor reappears to taunt Firion about his friends leaving him behind. Firion tells the Emperor they left only to accomplish their goals, and he still wishes to accomplish his goal of ending the war. The Emperor tells Firion his dream is futile, and Ultimecia appears to battle Firion. Firion defeats her but Ultimecia reappears immediately after, and both she and the Emperor accuse Firion of being a tool of Cosmos, fighting only because she told him to. Cosmos meets with Firion, who tells her what the Emperor said to him. Cosmos reassures him of his dream to end the war and fill the world with roses, and a newly inspired Firion continues on.

Encountering the Emperor again, he attacks Firion and subdues him with one blow. However, Cloud and Tidus come to his rescue, protecting him and forcing the Emperor to flee. Cloud presents Firion with the rose Sephiroth stole from him, telling him his friends wish to see his achieve his dream. Firion takes the rose and follows the Emperor to Pandaemonium. The two battle, and Firion prevails and claims his Crystal. Though he knows the war is still not over, Firion resolves to keep fighting and see his dream world of wild roses come to be with the help of his friends.

With Cosmos gone and the world about to be consumed by discord, Firion and the other warriors battle the revived villains and attempt to destroy Chaos before they vanish without Cosmos. Confronting the Emperor again, the Emperor declares that it was his plan that was responsible for the death of Cosmos, a plan that relied on the heroes acquiring their Crystals. Thanking them for fulfilling their role in his plan, the Emperor battles Firion and is defeated a second time, fading with a cry. After defeating Chaos, the heroes return to their own worlds. Before fading to go home to Fynn, Firion gazes at a field of roses and states that a new dream is starting. Template:Endspoilers

Template:See Also Firion is a Weapons Specialist, and fights by combining his weapons to perform powerful combo attacks. His Brave attacks can both drag opponents closer or send them flying away, letting him keep enemies off their guard. His HP attacks combine his magic with his wide array of weapons, and similarly are divided between close and mid-range attacks. Firion's largest weakness is his poor list of aerial attacks, and he is most proficient fighting on the ground. He also has very poor movement speed. 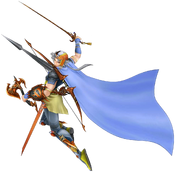 thumb|300px|right|Fervid Blazer Firion's EX Mode is Blood Weapon equipped where all his weapons turn red and orange, a reference to the Blood Sword in Final Fantasy II which was the best weapon to use when fighting the Emperor. While in EX Mode, Firion gains the Regen status, recovering HP over time, and the ability "Blood Weapon," which follows the tradition of such weapons by healing Firion an equivalent amount of HP whenever he damages the opponent's HP.

Firion is able to equip all Weapons save for other characters' unique equipment. He can equip Parrying Weapons, Shields, Bangles, Hats, Helms, Clothing, and Light Armor. 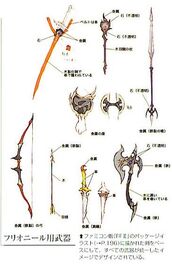 CG Render
Add a photo to this gallery