A virtuous youth who seeks to end conflict. He uses the nostalgic phrase "Wild Rose" as a source of motivation.

A young warrior skilled in many types of weaponry. He is hot-blooded, with a strong sense of duty.

Representing Final Fantasy II, Firion is a young man skilled in armed combat, including swords, lances, bows, knives, axes and staves. Passionate with an unshakable sense of justice, Firion fights for a world "where wild roses can bloom freely," symbolizing freedom from war and tyranny. His dream stands in opposition to the desires of his adversary, the Emperor. In Dissidia 012 Final Fantasy, Firion's fighting style was heavily re-balanced.

Firion's original outfit is based on Yoshitaka Amano's artwork ( 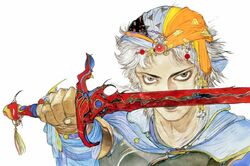 ) from Final Fantasy II. He is clad in black and blue armor with a flowing blue cape. He has silver hair tied in a ponytail, and covered by a brown, orange and white bandana. He carries a wild rose as a reminder of his dream. Firion uses six different weapons and is also skilled in unarmed combat, representing his mastery of the seven attack classes of Final Fantasy II: sword, axe, bow, staff, dagger, lance, and fists. He carries a shield based on the one ( 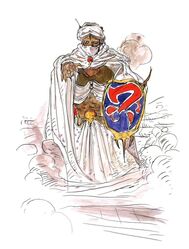 ) used by his comrade Minwu.

Firion's first alternate outfit, "Spiky Hair," is based on an alternate Amano artwork ( 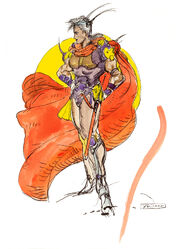 ) that depicts him with a red cape, a different hairstyle and bandanna, and recolored armor. His EX Mode colors his body armor gold as seen in another Amano artwork ( 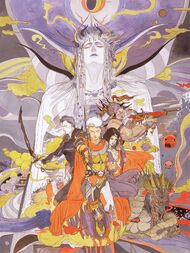 Firion's second alternate outfit, "Bone Band," is based on another artwork by Yoshitaka Amano ( 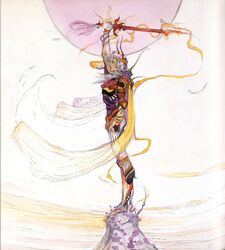 ), giving him a headpiece with horns, a purple cape, primarily purple and red armor, and longer hair. His EX Mode gives him light blue clothing and armor.

His Crystal is a pink shard.

There are things you can't discard or give up on...if they realize your dream. I...want to create a world of peace. A world without lives being lost, or people weeping over the loss of a loved one... I'll make a world where everyone can peacefully gaze upon fields of wild roses!

Firion's strong will and sense of justice have enabled him to carry on regardless of the risks, though this has led some of his fellow warriors, particularly Tidus, to perceive him as uptight, and his enemies to see him as a tool. Firion is hot-blooded, as shown when he pursues Sephiroth for stealing his rose and his conversations with the Emperor, whom he despises.

Firion holds a dream of a world filled with wild roses, symbolizing freedom from conflict. He is self-conscious about this, perceiving his dream as childish for a warrior, even though Lightning and Cosmos tell him otherwise. Toward the end of the conflict, Firion has accepted his comrades knowing about his dream, and is glad they strive for it to become true.

In Dissidia Final Fantasy NT, Firion is unwilling to be involved in a conflict he deems pointless, recalling the cycle of war between Cosmos and Chaos. He is initially reluctant to participate in Materia and Spiritus's attempt to continue the war, opting to find a route to his and his allies' respective worlds instead. Nevertheless, Firion fights to save the gods' world, and later leaves his memories behind within a duplicate of himself to continue fighting on their behalf, suggesting that he shares his allies' fondness for the realm that has allowed them all to meet again.

Firion is a warrior with few memories, implying he hasn't participated in many cycles of battle, or that he is a new warrior. He later accompanies Laguna and Squall on a scouting mission to the Crystal Tower, where they discover a wild rose. Firion becomes fixated with it, feeling a connection due to his memories. He holds onto the rose for some time, resulting in some of his memories returning, though he eventually loses it, with the rose being found by Lightning.

Later in the Crystal World, Firion resigns to forgetting about the rose. Cecil arrives and picks up on his expression. He notices Firion staring at Lightning, but misinterprets this as shyness and calls Lightning over, much to Firion's embarrassment. Firion attempts to establish privacy between the two, but isn't successful. He tells the others to forget about it and runs off.

Over their journey, Firion attempts to speak with Lightning multiple times, but is unsuccessful. He eventually gets his chance at the M.S. Prima Vista, where Firion asks if she's picked up anything of his. She presents the rose, with Firion being gladness it wasn't thrown away. She returns the rose and Firion explains his connection with the flower. Lightning reveals the rose had the same effect on her, and Firion agrees to keep it safe and return it to her once his memory has returned.

Later on, Kain encounters Firion in World B due to the number of manikins in the gateways. The two battle the growing force of manikins but Kain betrays Firion and knocks him out to keep him safe for the next conflict. Shinryu's purification after everyone has fallen results in Firion forgetting his promise to Lightning.

At the beginning of the final cycle, Firion accompanies Cecil, Cloud, and Tidus on search for their Crystals. Cloud questions why his companions fight and Firion does not respond, attempting to think of a way to explain it. Later, Firion shows Cloud the wild rose, explaining his dream to see a world where they bloom freely, and vows to end the fighting to see that world come true. Wishing to understand the strength given to him by his dream, Cloud requests to battle Firion. Firion is defeated, but for Cloud, it is an empty victory, as he realizes he has no dream at all. Firion, despite fatigued, attempts to keep fighting, and Cloud compliments him on his resolve. Cloud departs to travel on his own to find his own reason to fight.

Continuing their journey, Firion learns more about his companions' reasons for fighting: Tidus fights to settle his grudge with his father, while Cecil struggles with his complex relationship with his brother, Golbez. When Golbez offers Cecil assistance, Firion warns him that despite their bond Golbez is aligned with Chaos, and it may be a trap. Cecil continues to ponder what Golbez told him, and Tidus convinces him to go see his brother. Firion accepts Cecil's decision and questions Tidus's bond with Jecht, though Tidus claims his desire is to defeat him.

As the two continue on, Tidus asks Firion what his dream is, but Firion is focused on ending the war. In truth, the rose had been placed where Firion found it by Golbez. As the enemies before them grow numerous, Firion and Tidus split up to rendezvous later. On the Lunar Subterrane Firion meets Jecht, having been blocked from fighting Tidus by the Emperor. Firion accuses Jecht of running from Tidus, and Jecht attacks, is defeated yet urges Firion to keep fighting. Firion tells Jecht he is not Tidus's substitute, and Jecht leaves to confront the Emperor over his meddling. Tidus finds Firion and tells Firion the Emperor spoke to him about his desire to fight Jecht, but as with Golbez, Firion tells Tidus not to trust him.

The two come across Jecht confronting the Emperor. The Emperor vanishes while Jecht limps off, wounded. Tidus tells Firion he is will pursue Jecht alone, and Firion gives him a potion to use on his journey. Tidus runs after Jecht, and the Emperor reappears to taunt Firion about his friends leaving him behind. Firion says they left to accomplish their goals, and he wishes to accomplish his goal of ending the war. The Emperor tells Firion his dream is futile, and Ultimecia appears to battle Firion. Firion defeats her but Ultimecia reappears and both she and the Emperor accuse Firion of being a tool of Cosmos, fighting only because she told him to. Cosmos meets with Firion, who tells her what the Emperor said. Cosmos reassures him of his dream and a newly inspired Firion continues on.

Encountering the Emperor he subdues Firion. Cloud and Tidus come to his rescue, and force the Emperor to flee. Cloud presents Firion with the rose Sephiroth stole, telling him his friends wish to see him achieve his dream. Firion follows the Emperor to Pandaemonium where he defeats him and claims his Crystal. Though he knows the war is not over, Firion resolves to keep fighting and see the world of wild roses come to be with the help of his friends.

With Cosmos gone and the world about to be consumed by discord, Firion and the other warriors battle the revived villains and attempt to destroy Chaos before they vanish without the goddess. Firion defeats the Emperor who declares it was his plan that killed Cosmos. After defeating Chaos, the heroes return to their own worlds. Before fading back to Fynn, Firion gazes at a field of roses and states to the Warrior of Light that a new dream is starting.

In "Firion's Quest 012: A Small Flower", Firion realizes after first finding his wild rose that a few of his comrades have fallen behind, and heads back to retrieve them. He battles a mind-controlled Terra to save the Onion Knight from her. He mentions the rose's connection to his memories to the Onion Knight, but when the two head back to Laguna and Squall, Firion realizes he lost it leading into Lightning finding it and Firion confronting her over it.

In "Sephiroth's Quest 013: Shape of the World", Sephiroth awakens in the 13th cycle and attacks Firion. Remembering in the 12th cycle Cloud was reluctant to fight, Sephiroth steals Firion's rose to goad Cloud into battling him. Firion pursues Sephiroth alone to reclaim it.

Firion is a Weapons Specialist who combines his weapons to perform powerful combo attacks. His Bravery attacks can drag opponents closer, then send them flying away, letting him keep enemies off their guard. His HP attacks combine his magic with his wide array of weapons, and similarly are divided between close and mid-range attacks. Firion's weakness is his poor list of aerial attacks, as he is limited to Swordslash and three spells, the latter of which work better as distractions.

In Dissidia 012 Final Fantasy, Firion's Reel Axe, Rope Knife and Lance Combo can change the second part of the attack by tilting the analog stick up or down, or leaving it neutral. These interchangeable followup inputs are the three followups for each of the attacks in the original Dissidia. His spells, renamed "Magic Arts," work the same way, casting three spells in succession with the second and third based on the analog stick's direction.

+ towards casts Fire, and

The commands and effects of his melee follow-ups are as follows:

In Dissidia 012, he is fought in the Beyond Doubt chapter of Story Mode. 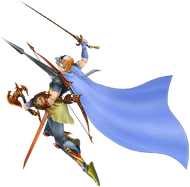 Firion's EX Mode is Blood Weapon equipped, which recolors his armor with red and orange details and gives the same coloration to his weapons, a reference to the Blood Sword in Final Fantasy II which was the best weapon to use when fighting the Emperor. While in EX Mode, Firion gains the ability "Blood Weapon", which follows the tradition of such weapons by healing Firion an equivalent amount of HP whenever he damages the opponent's HP.

Firion's EX Burst is Fervid Blazer where he attacks the opponent with the full force of his weapons and magic. The player must input five button commands within a time limit to attack the opponent with Firion's lance, daggers, axe, staff, and sword enchanted with magic, followed by using his bow to launch his weapons at the opponent, creating an explosion.