Firemane is a boss in Final Fantasy XII fought in the Garamsythe Waterway. It is the second boss of the game, and a Fire-elemental horse.

When Man first began to use fire not as a sacred object, but as a weapon of war, it angered a great spirit of flame, this appearing among us as a stallion, cloaked in searing fire, its body of a heat impossible to measure.
When, every once in a rare while, the Garamsythe Waterway fills with a thick fog, it is said that the Firemane is galloping its ways and channels, its fiery rage boiling the waters into steam.

Amalia will be using Potions on characters who are low on HP. In Final Fantasy XII, Fire-elemental monsters are weak to Water, rather than Ice. The pools of water on either side of the battlefield won't damage Firemane, though it will increase the amount of damage the party can do to it by a modest amount; it can be lured out by having the party retreat and waiting for it to follow. The boss hits hard physically and occasionally casts Fire to characters who are not standing in water. Firemane's special attack, Bushfire, can inflict Poison, and affects the whole party.

Amalia may not be able to provide Potions fast enough to balance the damage, so it is advisable to give someone else a curative gambit. To mitigate magick damage, the party can equip the Goddess's Magicite on someone not responsible for Cure magick. The party will not have any Water-elemental spells at this point, so the best strategy is to cast Protect and use physical attacks while luring the Firemane to the water terrain. It's useful to have a few Antidotes ready.

Montblanc will give the player 200 gil for defeating the Firemane.

The Firemane is defeated when Balthier shoots it in the eye to blind it and it is frozen by Fran's "Sesshouku Hatsudo" Quickening and crushed by the ice. The Firemane is is very large, and can reach over sixteen feet. 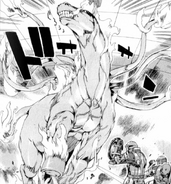 Fran finishing Firemane with "Sesshouku Hatsudo".
Add a photo to this gallery

Firemane begins casting Fire.
Add a photo to this gallery

Retrieved from "https://finalfantasy.fandom.com/wiki/Firemane_(Final_Fantasy_XII)?oldid=3354651"
Community content is available under CC-BY-SA unless otherwise noted.