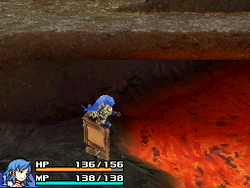 Fire Mountain (炎の山, Honō no Yama?) is a location in Final Fantasy Crystal Chronicles: Echoes of Time. It is an active volcano, and the second place that Larkeicus asks the Hero to go to as part of his archeological studies. Fire Mountain must be visited twice during the storyline.

Fire Mountain is covered in lava, which damages characters who enter. Ornate red and golden jars are also found around the mountain, which can be ignited with a Fire spell and explode, clearing nearby rock obstacles. Rolling boulders are also prevalent in all areas.

Larkeicus requests that the Hero repair the Ruins at the peak of Fire Mountain, similar to the situation at Ice Mountain. After traversing lava pools and steep cliffs, the party encounters a Lava Spider guarding the very top of the Mountain. After the Arachnid's defeat, the protagonists climb the peak and push a block into a strange device, seemingly fixing it.

After the Crystal Core shatters, the device that Veriaulde gives the hero indicates that there is a piece of the Crystal Core at Fire Mountain. The party returns to the volcano and opens up a new area, defeating a trio of Adamantoise and retrieving the Core shard.

The final return to Fire Mountain comes when Sherlotta assembles both pieces of the Undead Princess' staff, which is rumored to open the way to the Tower. Both elemental mountains are visited, and Sherlotta notices a small black cube with an eye insignia at the base of each mountain's ruins. With the staff, she smacks the cube, which powers up the ruins. The ruins on Fire Mountain blast a beam of energy at the right side of the Gate, and when both sides are lit up, a bridge from the Gate to the Tower forms.

Fire Mountain on the world map.

A breakable wall, only destroyed by an explosive barrel.

An explosive barrel, used to destroy walls by casting a Fire spell on it.

A damage floor, which inflicts Burn status on anyone touching it.

Lava which damages anyone that falls deep enough in it as well as inflicts Burn status.

A rolling boulder, which inflicts minor damage and Burn status to anyone hit by it.

A water barrel, used to put out flames on the mountain as well as anything on fire.