The Fire Hydra, also known as the R.HYDRA in the Nintendo Entertainment System, is an enemy in the original Final Fantasy. Like their cousins, the normal Hydras, they may attack with their multiple heads up to three times, but their attacks are relatively weak. They may also use their Blaze attack, which can deal Fire damage to the party. However, this is not strong either. Some normal attacks and even Ice spells will defeat this enemy. They appear in groups of up to four Hydras, and these groups are quite rare however, normally appearing alone, and being easy to defeat. 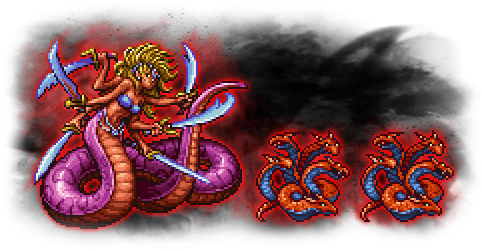 Retrieved from "https://finalfantasy.fandom.com/wiki/Fire_Hydra?oldid=3237960"
Community content is available under CC-BY-SA unless otherwise noted.