A cavern near Balamb Garden where a Fire element GF lives.

The Fire Cavern is a location in Final Fantasy VIII. Located east of Balamb, the cavern is home to numerous fire-elemental monsters and serves as the home for the fire Guardian Force, Ifrit.

Balamb Garden uses the cavern as a testing ground for its students to see if they are ready for the SeeD field exam.

The Fire Cavern is the first location the player is asked to visit and functions largely as a tutorial with Quistis guiding Squall through the trial. The cavern does not hold any secrets or reasons to return, but is still accessible during the endgame.

The Fire Cavern is situated to the east of Balamb Garden and on the edge of the Gaulg Mountains overlooking the Albatross Archipelago. The cavern is filled with magma, giving it a reddish glow, with only a small rock path to travel across. Alongside the small path are either harsher, impassable stalagmites, or flowing magma. It is populated entirely with fire-elemental monsters.

None
The Cavern Entrance consists only of a dirt path across the grass, presumably carved by the Garden, leading into the cavern's entrance on the side of the mountains. The path is surrounded by small rocks with larger rocks across the grass that the path cuts through. The entrance upon approach is guarded by two Garden Faculty members, who ensure the visitor has authorization and, if during a prerequisite exam, has the necessary preparations completed and another faculty, such as a teacher, to assist them within the cavern. This section consists of only two areas, one larger area overlooking the cavern, and a smaller one closer to the Garden Faculty. There are no encounters in either of these areas.

The Cavern Depths are populated with various fire-elemental monsters, including Bombs, the Buels, and the Red Bats. Buels and Bombs are fixed at level 5, while Red Bats are fixed at level 4. There are no encounters on the path that leads to the cavern. During the first run through under a time limit where the goal is to defeat Ifrit, it may be best to simply flee from these encounters, as they can still be fought after defeating Ifrit. After returning to fight them, it is best to junction Blizzard to Squall and Quistis's normal attacks to deal more damage against the enemies. From Buels, Squall and Quistis can draw all three elements (Fire, Blizzard, and Thunder), a good opportunity fill up on these spells.

Ifrit
Ifrit's Dwelling consists of two areas: the first is a long stretch of rocks forming a path to the dwelling, and the second is inside the dwelling. The dwelling itself is a small, round patch of rocks in the middle of the magma, with large, sharp stalagmites from the lava surrounding it. At the center is a pit of magma where Ifrit dwells. Ifrit will awaken and emerge from the magma upon approach to face whatever the challenger has to offer.

The first area features encounters similar to the Cavern Depths, while the second only has Ifrit.

After getting to the Fire Cavern, two Garden Faculty members wait at the entrance and let the player choose a time limit for their challenge. The options are 10, 20, 30 or 40 minutes. At the end of the cavern, Squall and Quistis fight Ifrit, and the amount of time left on the clock at the end of the battle determines the Judgement section of Squall's SeeD score he receives after the exam.

For the maximum score, the player should aim to defeat Ifrit with 7 or fewer seconds on the clock while being aware that Ifrit's dialogue at the end of the battle also counts towards the limit, and if the player runs out of time during the post-battle dialogue, they still lose. The player can allow the game to remain in the screen where the player names Ifrit, and let the time run out during it to get the maximum score; although the timer does not appear on the naming screen, it will keep counting down.

In the Japanese version, the timer only stops after the player makes it back to the entrance and talks to the Garden Faculty there.

The Fire Cavern's theme is "Find Your Way", which is the standard dungeon music shared by other places in the game.

Squall has undergone rigorous training as a student at Balamb Garden Military Academy. Now, to earn a chance to become a member of SeeD, Garden's elite mercenary force, he and Quistis head for the Fire Cavern. 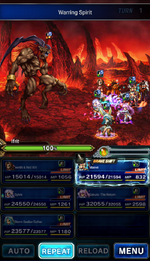 In the English version, when Quistis jokes that her presence at the test makes boys nervous, Squall replies with "whatever". In the Japanese version, he says "...you're a teacher" implying he disapproves of Quistis's behavior.

Concept art from outside the cavern. 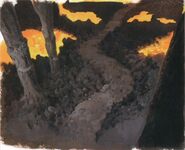