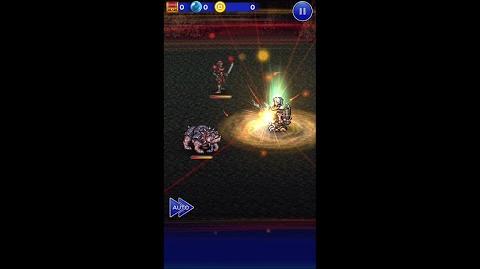 Fire damage to one enemy.

Fire Beam (ファイアビーム, Faia Bīmu?) is a recurring ability in the series. It is a Fire-elemental ability used exclusively by characters riding the Magitek Armor.

Fire Beam is an ability usable by anyone riding the Magitek Armor, which deals Fire-elemental damage to one target with a Spell Power of 60. Fire Beam is reflectable due to a bug. The ability is classified as an Attack magic in the mobile version.

Fire Beam is an active ability that allows the user to deal fire magic damage (1.2x) to a single target at the cost of 3 MP. While it can be learned only by Biggs (level 22, 2★) and limited unit Magitek Armor Terra (level 3, 3★), other units can access the skill by equipping the Fire Beam materia that grants Wedge as his Trust Master reward.

Fire Beam is an active, fire-elemental magic ability that inflicts magical fire damage on a single target for 6 AP. It can be used by Crimson Armor, Magitek Armor, and Magitek Armor P.