Arrow immersed in the power of fire.

Fire Arrow (炎の矢 or のおのや, Honoo no Ya?, lit. Flame Arrow), also known as Fiery Arrows, Flame Arrow, and Fire, is a recurring weapon in the series. It is an arrow that is of the Fire-element.

Fire Arrow is a low to mid-ranked arrow that provides 17 Attack (30 on the NES, is Fire-elemental, and can be bought for 150 gil (30 on the NES) at Village of the Ancients or found as treasure at Castle Argus.

Fire Arrow is a low-ranked arrow that provides 15 Attack and is Fire-elemental. It can be bought for 30 gil at Troia, dropped from Flamehound, Chimera, and Chimera Brain, or found as treasure in Sylph Cave.

Fire Arrow is a low-ranked arrow, providing 10 Attack and is Fire-elemental. It can be bought in Damcyan, Fabul, and the dwarf shop on Falcon for 30 gil, or dropped from Chimera, Flamehound, and Chimera Brain. It can be equipped by Cecil, Rydia, Rydia?, Rosa, Palom, Porom, and Cid.

Fire Arrow is a low-ranked arrow that provides 15 Attack and is Fire-elemental. It can be equipped by Cecil, Ceodore, Cid, Rosa, Rydia, Palom, Porom, Edward, Luca, Leonora, Izayoi, and Harley. It can be bought for 500 gil at Agart, Mist, and Troia, dropped from Flamehound, Chimera, Chimera Brain, and Melt Golem, or found as treasure at Passage of the Eidolons (during Porom's Tale).

Fire Arrow is an archery weapon that provides 29 damage, 120 Delay, and an additional Fire damage effect. The additional effects' damage is based on INT. It deals 14.5 damage per second and accumulates 45 TP per hit. It can be equipped by level 45 Warrior, Red Mage, Thief, Paladin, Dark Knight, Beastmaster, Ranger, Samurai, and Ninja.

Fiery Arrows is a low-ranked arrow that provides 1 Attack and is Fire-elemental. They can be obtained from the Bazaar from the "Arrows Alight" set. They deal boosted damage when paired with the Burning Bow.

In the Zodiac versions, they can be bought for 800 gil at Necrohol of Nabudis, found as treasure at Barheim Passage (East-West Bypass), Trial Mode Stage 19 (with Diamond Armlet), Tchita Uplands (Uazcuff Hills), or Nabreus Deadlands (The Slumbermead), or from the Bazaar from the "Arrows Alight" set. They can also be stolen (55% base chance) from Croakadile in Trial Mode Stage 11. 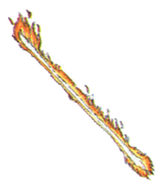 [view · edit · purge]Flaming arrows were used throughout the ancient and medieval periods. The simplest flaming arrows had oil- or resin-soaked tows tied just below the arrowhead and were effective against wooden structures.