Fire is an Attack spell in Final Fantasy VI. It is the basic fire-elemental spell that can be used to hit one target or an entire party. It is learned naturally by Terra at level 3, and can later be earned by other party members through magicite.

Fire is an added ability to the Flametongue and Burning Fist weapons.

Terra learns Fire naturally upon reaching level 3, while other party members must learn it through magicite. It is taught by Siren at a x6 rate, Ifrit at a x10 rate, and Bismarck at a x20 rate.

As a spell with a power of 21, it deals damage with the following formula:

where "Level" refers to the user's level, and Magic refers to the user's Magic stat. As a standard spell, when Fire is group-cast, its damage is halved, the target's Magic Defense and shell play a role in mitigating damage, and the spell can potentially be blocked by Magic Evasion.

Fire can be used by the party early on as a basic offensive spell, and is the most MP-efficient than the first three basic spells (although Blizzard is slightly stronger, the difference is negligible where the MP difference is more significant). It is strongest against enemies weak to the fire element, as it will deal double damage to them and likely cripple them early on. The spell's small MP cost means it can be used frequently without too great a concern for the user's MP, though against groups of enemies, it is more MP- and turn-efficient to split its damage.

Terra learns Fire naturally, and when she joins the party, it will be her main damage output. For other party members, as an Attack spell, the player should prioritize teaching Fire to party members with a high natural Magic stat and access to mage equipment. This includes Celes, Relm, and Strago; Mog and Shadow have high Magic stats, while Gogo has access to mage equipment. Though Sabin will be built toward magic damage, his access to Aura Cannon and ability to cast the spell through Burning Fist make him less of a priority than others. As an easy spell to learn, all party members should eventually be taught the spell.

Fire is outclassed by Fira in terms of damage output and turn-efficiency. Fira's higher MP cost initially means it should be saved for bosses and tougher enemies, unless the caster is using the Gold Hairpin. Later in the game, Fira can be used more frequently, and by the time Firaga and Meltdown are learned, Fire is effectively obsolete. 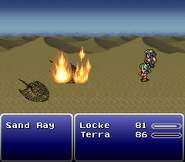