Fiona (フィオナ, Fiona?) is a half Lilty, half Clavat ruler of Alfitaria from the Final Fantasy Crystal Chronicles series. In the original Crystal Chronicles, she is a Princess who has run away from her duties. Her father was a Lilty while her mother, who had passed away, was a Clavat.

Fiona has blonde hair tied in a high bun, hiding her Lilty sprouts and light blue eyes. She wears a tight black turtle-neck halter top and white skirt with orange lining, gold circle designs and gold front. She has white sleeves held on by gold armor and silver gauntlets and armored boots. She has a light brown marking on her left cheek.

In her disguise, she wears a white fur cropped halter top with an orange collar. A dark teal Selkie-like asymmetrical skirt with a brown belt with a large gold buckle and white stockings with stripes on the left leg. She has silver gauntlets with white gloves and ankle-high armored boots. She has purple markings on both cheeks and her Lilty sprouts are noticeable on her head.

When first arriving at Alfitaria, many of the Lilties do not seem to approve of the Princess, while she is thought highly of by Clavats. At some point she goes missing and her protector, a Lilty Knight named Knocfelna and his loyal dog Diadra, who are trying to search for the Princess ask the Tipa Caravan for their assistance in finding her.

Knocfelna pleas with the Princess to return, but she just wants him to leave her alone. While on the boat to Leuda the two will argue as Fiona does not want Knocfelna following her, but he stands by her anyways as it is his duty to protect her. After the Tipa Caravanners leave Leuda, a scene will begin where the Princess explains her actions for leaving to Dow Hatty. Bored of the dark castle she lives in and wanting to exploring the world. She envied the Crystal Caravanners and was amazed by their determination. Dow Hatty encourages the princess to shine. She agrees and decides it is time to return to Alfitaria.

A celebration is held in Alfitaria for the Princess' return. The Caravanners bow down as she gives them her thanks for inspiring her. Then, she awards each member with 100,000 gil.

She serves as an antagonist, where she is Queen of Alfitaria. Fiona seeks Mira after rumors of Mira being a hybrid, like herself, reach Alfitaria. She wants Mira to become a bridge between the monster and the people to finally bring peace to the world. However, the young darklord dismissed the plan, letting Fiona go without her punishment.

Sometime later, after hearing about Mira's change of heart, she spread the rumor about the King's Seal, an artifact with the supposed power to make whoever gained it the leader of the world, being somewhere on the island Mira is vacationing on at the moment. Later, Fiona reveals that her true intentions was to make Mira construct her tower in a spot where she could offer her a magnificent view as a present. Though the present is welcomed, it is implied that Mira ends up punishing Fiona for the trick.

Fiona is fought as a boss in My Life as a Darklord twice. The first time she is fought at Aresial Island at the end of the third chapter. The second time, she is the last boss of the optional sixth chapter at Camo Amidi Flats.

Fiona on a wind-elemental card. 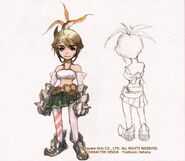 Fiona in her disguise.

Masked render from My Life as a Darklord.

Render from My Life as a Darklord.