A limit skill that inflicts a variety of status effects.

Finishing Touch (画竜点睛, Garyō Tensei?, lit. Finishing Touch)[note 1], also known as Finish Touch, is a recurring ability in the series linked to Cloud Strife. It originally appeared as a Limit Break for him in Final Fantasy VII. During the attack Cloud swings his sword to create a twister.

Finishing Touch is Cloud's second-to-last Limit Break, learned after using Meteorain six times. It inflicts instant death to all enemies, and for enemies immune to instant death, it will inflict damage equal to 3.125 times normal damage.

Cloud uses an attack similar to Finishing Touch during his battle against Kadaj in Midgar. Kadaj jumps up, and Cloud assembles his Fusion Swords into a single sword and spins it around his head. Unlike in the game there is no tornado, just a distortion in the air. He drops the Fusion Swords to his side and it begins to glow blue. When Kadaj comes back down Cloud catches him on the flat of his sword, holds him there for a second, and then hurls him over the edge.

This section about an ability in Final Fantasy VII G-Bike is empty or needs to be expanded. You can help the Final Fantasy Wiki by expanding it.

Finishing Touch is the ability used by the Wind-up Cloud minion in the Lord of Verminion minigame. It delivers an attack with a potency of 380 to all enemies within range.

Finishing Touch (Finish Touch on PlayStation) is an ability exclusive to the Soldier class, which is exclusive to Cloud. It takes 670 JP to learn, has a range of 3 tiles, effect of 2, and a speed of 20. It has the ability to either inflict KO, Stone, or Stop.

Finishing Touch is a Bravery to HP attack for Cloud, which can only be used while on the ground and chains from Sonic Break. It takes 40 CP (20 when mastered) to equip, 300 AP to master, and can induce Wall Rush.

Finishing Touch is a Bravery to HP attack, requiring 30 CP (15 when mastered) to equip and 120 AP to master. It retains all other effects from the previous game.

Finishing Touch is a Bravery ability for Cloud acting as his second skill unlocked at Crystal Level 20. It is a four-hit ranged Bravery attack that will automatically launch the target, though it comes at 2 base uses (but via a later quality-of-life patch, it becomes 3 base uses instead).

With his Rune Blade 35 CP weapon passive, the ability's potency increases while also granting Cloud 3 total buffs (a Max BRV Up, Physical Attack Up and Crit Rate Up) for 5 turns when performed. It also gives one extra use to the base ability count.

However, as with Cloud's eventual rework, the reworked version of Finishing Touch Extend instead comes with many more new features on top of the one-turn-buff-extension; gaining BRV before unleashing the attack (a trait shared with Cross-Slash Extend's rework), higher potency, critical hit damage increase, 150% Max BRV overflow, an HP damage portion at the end, while also increasing the potency of Cloud's buffs gained from the 35 CP passive and extending their duration plus 3 extra turns. Reworked Finishing Touch Extend also turns his Bravery Attack into Bravery Attack+ (2-hit attack with higher potency and critical hit damage increase) and Cross-Slash into Cross-Slash+ (where it gains a higher paralyze chance) both for 8 turns. However, using Cross-Slash+ once will return it into its normal version, prompting the use of another Finishing Touch to bring it up once more.

Finishing Touch is Cloud's Overstrike Soul Break that can only be learned from the Ragnarok relic. The ability deals massive physical wind and non-elemental damage to a single target. The ability naturally breaks the damage cap, making it useful against higher difficulty challenges. If Cloud completes battles alive with the weapon equipped, he can eventually master Finishing Touch without needing to be equipped with the weapon and will gain a bonus of 10 to his attack stat. Finishing Touch costs 2 Soul Gauges to perform.

An alternate version known as Eye of Darkness (暗龍点睛, Anryō Tensei?, lit. Dark Dragon Finishing Touch) also appears as Cloud's second Arcane Overstrike Soul Break. The ability's name derives from Finishing Touch's Japanese name. The ability can only be learned from the Durandal relic. The ability deals three massive physical dark-elemental attacks to a single target. The ability naturally breaks the damage cap, making it useful against higher difficulty event challenges and light-elemental magicite encounters. Once the player masters the soul break, they will earn a bonus of 10 points to Cloud's attack stat. Eye of Darkness costs 3 Soul Gauges to perform and can only be used once per battle.

One of Cloud's cards is able to use Finishing Touch. For the discard of a Cloud card, Dulling Cloud, and paying one Light CP, Finishing Touch allows the player to select one Forward and deal it damage equal to Cloud's Power.

Finishing Touch appears as a Down Special attack for Cloud. When the Limit Gauge is charged, the Limit Charge Down Special is replaced by the Finishing Touch Down Special. When activated, Cloud's Limit stock is consumed and Cloud spins in place with Buster Sword outstretched to generate a small, green whirlwind around himself. This attack deals 1% damage and massive knockback when it connects. The knockback of this attack is able to OHKO characters at a minimum percentage proportional to their fall speed; characters with lower fall speed, such as Jigglypuff, require lower percentage for Finishing Touch to kill, and higher fall speed characters such as Fox require higher percentage. This attack also generates a minor windbox that pushes characters directly outside the whirlwind's hitbox. 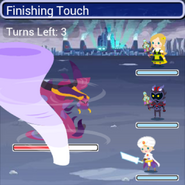 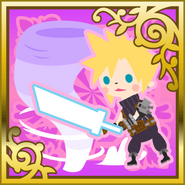 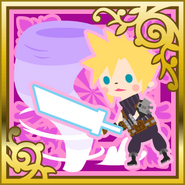 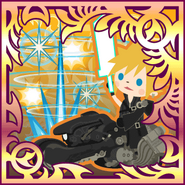 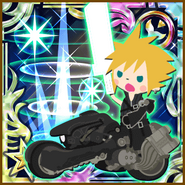 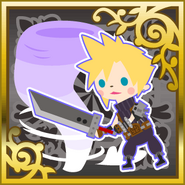 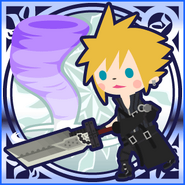 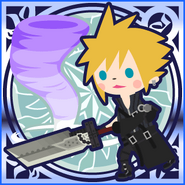 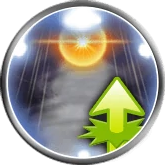