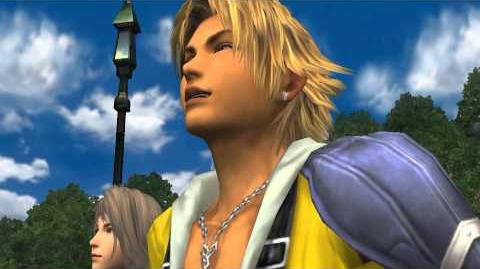 It's embarrassing to say this myself... But summoners and their guardians are kind of like Spira's ray of light. A lot of people in Spira depend on us. I learned to practice smiling when I'm feeling sad, you know? I know it's hard.

An infamous scene in Final Fantasy X centering on Tidus has become known as the "laughing scene", where Tidus pretend-laughs at Yuna's encouragement for him to appear happy even when he isn't. The scene has gained notoriety among fans.

Tidus is a citizen from Dream Zanarkand who has ended up on Spira, a world terrorized by a colossal monster known as Sin. After reconnecting with his mentor Auron in Luca, having last seen him when Sin attacked Zanarkand and he was swept away to Spira, Tidus learns Sin is supposedly his father Jecht who disappeared from Zanarkand ten years ago. Confused and unwilling to believe this apparent impossibility, Tidus becomes depressed and draws Yuna's attention.

Yuna is a summoner on a quest to kill Sin. Tidus is helping her both to save Spira and for hope he would find his way home, as Zanarkand is the eventual destination of Yuna's pilgrimage. As Yuna's party is about to leave Luca after Tidus and Auron become her new guardians, she notices his depression. She explains that summoners and guardians exist to bring hope to the people of Spira, and that's why she has practiced looking happy even when she feels sad inside. She encourages him to first smile and then laugh out loud.

Tidus goes along with Yuna's coaxing and "laughs" loudly until Yuna asks for him to stop. He doesn't, and Yuna decides to join him. The two burst into genuine laughter over the silliness of the situation while the rest of Yuna's party looks on in confusion, Wakka commenting he thought the pair had gone mad.

Even in the real world, actions taken by two people in a budding romance are generally embarrassing memories when you look back on them. I believe that this scene depicts that mental state very well. This scene of course is still made fun of by fans, but I imagine that it is because it greatly touched “something” in everyone’s heart for it to be such a memorable scene even after 18 years.

Director Yoshinori Kitase commenting on the "laughing scene" in 2019[1] 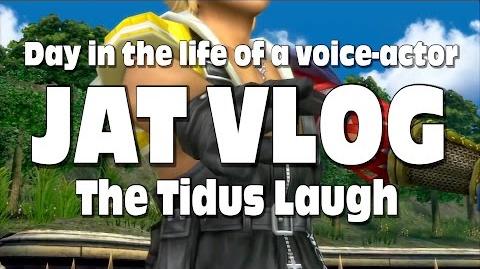 The localization director Alexander O. Smith has commented the scene being just as "weird and stilted and out of place" in the Japanese as it is in English. Smith has praised Tidus's voice actor, James Arnold Taylor, for his performance for the scene, and considers it equally awkward in both versions and thus a successful localization.[2] Taylor himself has commented that the laugh is supposed to be "awkward, goofy and dumb".[3]

Alexander O. Smith agrees that the scene is ridiculous, but funny. He has said he hadn't really sat back and thought about the scene's emotional impact as the lead-up to Yuna saying she wants her journey to be full of laughter. It's a melodramatic thing to say, and thus quintessentially Japanese. When localizing Japanese games Smith usually strives to rein things in and make them more realistic, but with the "laughing scene" it was impossible. Smith had asked the main writer, Kazushige Nojima, about the scene, and learned that forced laughter was something Nojima had been doing when taking acting classes.[2]

A Twitch streamer named "MonotoneTim" popularized the idea of remixing the game's soundtrack using Tidus's laugh edited to sync with the music. A mod for the Steam release of the game called "Tidus Fantasy X" exists that replaces all of Tidus's voice lines with laughter, and replaces parts of the soundtrack with remixes that use the laugh.[4] As a response to the laughter's growing popularity as a meme and the creation of this mod, James Arnold Taylor released a video of himself edited to make it appear he is lip-syncing to the "Tidus Fantasy X" remix of the Zanarkand theme.[5]