Warrior's Armguard.
Add a photo to this gallery

Wizard Armlet.
Add a photo to this gallery

Spiritual Targe.
Add a photo to this gallery 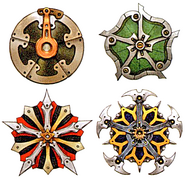