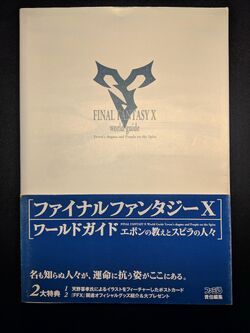 Final Fantasy X World Guide - Yevon's dogma and People on the Spira (ファイナルファンタジーX ワールドガイド エボンの教えとスピラの人々, Fainaru Fantajī Ten Wārudo Gaido Ebon no Oshie to Supira no Hitobito?) is a Famitsu book published by Enterbrain in Japan in 2001. It is printed on A5 and contains 191 pages. The ISBN is 4-7577-0608-1.

The work is in the perspective of an editor who has experienced the events of Final Fantasy X and wishes to convey the harsh realities of a Spira 10 years prior to the Calm. It is a compilation of works on various subjects written by anonymous denizens of Spira from around that time, and includes notes from the editor that help a contemporary reader to parse the content. The work is split into two parts. The first showcases the stories of three summoners who attempted to defeat Sin. The second part showcases the views of people towards different facets of life 10 years into the past and is divided into ten different topics. The end of the book also contains some bonus illustrations, info on tie-in merchandise, as well as two postcards featuring art by Yoshitaka Amano.

Final Fantasy X World Guide is not a walkthrough, but rather an in-universe, retrospective guide to the world Spira, which provides insight into how the world was like a decade before the events of Final Fantasy X.

Note: The book provides its own translated headings.

Stories of three nameless summoners that take place 10 years before Yuna's own. These are the tales of those who attempted to defeat "Sin" in Spira, a world bound by a neverending cycle of sorrow.

A trip for revenge[edit | edit source]

The tale of a summoner who goes on a journey to seek revenge against "Sin" for the loss her beloved husband; a journey with an unexpected end.

The journey of a highly praised and talented adolescent summoner, and the haughty swordsman who becomes his guardian. Although everything appears to start smoothly, but all is not well.

A trip to survive[edit | edit source]

In a world like Spira where monsters run rampant, people must learn the art of "battle" to survive. In this chapter, we consider how people made weapons and armor, perfected abilities, and learned to survive in Spira in the days before the advancement of civilization

Battle Against the menace[edit | edit source]

This section talks about where fiends come from, as well as how to go about arming oneself against them.

About black and white[edit | edit source]