Final Fantasy XV has content not used in the final game still left in the game files, some from the early Final Fantasy Versus XIII era.

A model of Noctis with his original attire used for the Final Fantasy Versus XIII reveal trailers is found dummied on the game disc.

There is also a dagger model that seems to be intended as a reward for completing Episode Ignis.

The full texture of the Cosmogony page young Lunafreya shows Noctis is not seen in the final game, because Lunafreya's hand obscures Carbuncle from the picture. 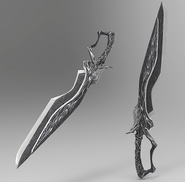 The game has some dummied character dossiers:[3]

Ignis Scientia
Born into a household that has advised the royal family for generations, Ignis has followed in his forebears' footsteps, serving as friend and confidant to the crown prince since age 6. Ever since Noctis lost his mother, Ignis has acted as a caretaker of sorts, keeping a close eye on his companion.

This is similar to the final dossier, but mentions that Ignis's forebears have served the crown before him, whereas the reason for Regis choosing Ignis as Noctis's caretaker is not said in the final game.

Ravus Nox Fleuret
High commander of the imperial army, and older brother to Lady Lunafreya of Tenebrae. Although he cut ties with his sister after the empire invaded and overtook their homeland, he has always kept her in his heart, using his position to protect her.

This may have been cut because Ravus doesn't seem to have severed contact with Lunafreya in the final timeline, the two still seemingly resident of Fenestala Manor in Kingsglaive: Final Fantasy XV.

Ardyn Izunia
This middle-aged military tactician rose through the ranks by reforming the empire's magitek infantry, and now runs the nation seated at the emperor's side. Quick-witted and observant, he not only grasps any situation in seconds—he also manages to transcend and take control of it shortly thereafter.

In the final game Ardyn's role as the chancellor is not expanded upon much (perhaps because he is never actually seen with the emperor), and his role in creating the magitek infantry 30 years ago is kept until it becomes apparent he has supernatural powers.

Episode Ignis has a dummied "friendly match" against Noctis with fourth wall-breaking dialogue of Noctis complaining about Ignis being the main character, stealing his spotlight. The win and lose dialogues are about the two arguing who has more fans.

Dummied dialogue from Final Fantasy XV: Episode Gladiolus[4] posits Gilgamesh had witnessed the Founder King's brother become a monster due to an unknown cause and turn against him, and the Shield of the King was a position to protect the King from this new threat. Gladiolus had asked if the soul he was talking to was one of the former Shields of the King, who had answered that he was one of the first who had worked for Gilgamesh to defend the Founder King. The "General" (Gilgamesh) had feared the king's brother's transformation was a harbinger of horrors to come and had sealed his own soul within the Tempering Grounds so that another Shield could one day seek his council and to entrust his power to the one who proves himself worthy of defending the King and become his successor. The soul had not been aware the Crystal had made its choice for the Chosen King, and asked about it from Gladiolus, who had affirmed yet admitted he doesn't know what being the Chosen King means.[4]

In the final game, Gilgamesh doesn't entrust his powers to Gladiolus, but rather, gives him advise and a sword he had taken as a spoil from a won duel. The souls Gilgamesh calls forth are not said to be previous Shields of the King in the final game, and the Founder King's brother being turned into a monster is not mentioned, either; perhaps revelations related to Ardyn were decided to be left until later.