Stories told in the Final Fantasy XV Universe tend to focus on Noctis Lucis Caelum and take place during his fight against Niflheim. They negate the necessity for multiple Final Fantasy XV games, something in which developers had no interest.[1] The contents of this franchise are standalone titles; they can be enjoyed on their own or as part of a larger tale.[2] 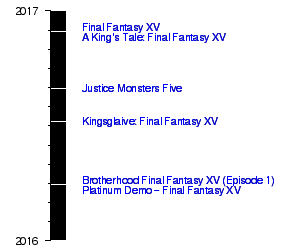 Final Fantasy XV was originally called Final Fantasy Versus XIII. It was to be part of Fabula Nova Crystallis: Final Fantasy, but this connection was reduced to unexpressed thematic elements that were used to build a new lore. Terminology and specific branding have been removed to distance Final Fantasy XV from the Lightning Saga.[5][6][7][8][9]

Many fans find the Final Fantasy XV Universe confusing because it reveals crucial story information outside Final Fantasy XV. Responding to this, Hajime Tabata laments his team's aim with the project is difficult to properly articulate: "I think we're going to have to work a bit harder to get that message across in the future. Obviously, the people who bought the main game are the most important to us. It's a group of people we feel we have to value very highly, so expanding on the main game and improving it for those people is our number one priority. [...] We also want to expand the audience and bring new people into it and these side games are a part of that."[12]