Final Fantasy XI ~The Out of Orders~ 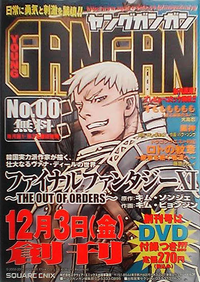 Final Fantasy XI ~The Out of Orders~ was a manga serialized in Young Gangan. It was one of the main advertised launch titles of the comic alongside Dragon Quest: Emblem of Roto, a title based on Square Enix's other main video game franchise, and started in issue 1 on December 17, 2004.[1] It was seralized for three issues before being put on hiatus and eventually canceled. It was written and illustrated by the Korean authors Kim Sung-Jae (キム・ソンジェ, Kimu Sonje?) and Kim Byung-Jin (キム・ビョンジン, Kim Byonjin?) respectively, the authors of the manhwa Chunchu.

It is an original story set during the Crystal War twenty years before the main story. This later became the setting for Final Fantasy XI: Wings of the Goddess.