Edit
watch 02:42
The Biggest New Features in Final Fantasy XIV: Stormblood
Do you like this video?
Play Sound

The expansion sees Adventurers heading to the Gyr Abania region in eastern Aldenard and beyond to the continent of Othard, liberating both the city-states of Ala Mhigo and Doma from the Garlean Empire.

Shortly after the events of the finale of the Heavensward expansion, the Warrior of Light and their comrades make way to the war torn region of Gyr Abania, home to the city state of Ala Mhigo, which is under the control of the Garlean Empire. After tragedy strikes in the wake of the Adventurer's efforts to help the Ala Mhigan resistance at the hand of the Imperial Viceroy Zenos yae Galvus, the Warrior of Light makes their way to the land of Orthard to the east to help liberate the Kingdom of Doma from the Empire. What follows is a quest that revolves around the liberation of both Ala Mhigo and Doma.

The expansion increased the level to 70 for all disciplines, while also introducing two new disciplines:

Red Mage. The battle system was revamped and introduced the Job Gauge gameplay mechanic, giving every job a unique gauge to eliminate the complexity of managing important buffs or to introduce more unique job elements. In addition, the cross-class system was removed from the game and replaced with a new cross Role system. Certain stats were reworked, replaced, or became exclusive to certain roles. Inventory space was expanded to 140 slots.

New locations were introduced in Gyr Abania and Othard. In Othard could be found the Ruby Sea, home to pirates and the Kojin beast tribe; Yanxia, home to the Garlean-occupied Doma; and the Azim Steppe, ancestral home of the Au Ra. In Gyr Abania, oppressive imperial structures towered over the Fringes and the Peaks, while the city-state of Ala Mhigo resided in the Lochs. Two new cities were added in the Resistance headquarters of Rhalgr's Reach and the merchant port of Kugane, which housed a new housing district, Shirogane.

Eight new dungeons were included at launch, ranging from a ship graveyard to Ala Mhigo itself. Three trials were also also added, including Extreme mode battles against the kojin and ananta primals Susano and Lakshmi. Patch 4.01, was launched shortly after release adding in the first wing of the

The Lost Canals of Uznair.

Note that the below version updates also added features and adjustments to A Realm Reborn (2.x) or Heavensward (3.x) content.

Released on October 10, 2017, The Legend Returns was the first major patch released for the Stormblood expansion. The main scenario saw a conference on the future of Ala Mhigo, while the Warrior of Light, Alphinaud, and Arenvald plumbed the

The Drowned City of Skalla for the hidden treasures of the Mad King Theodoric to help fill the nation's coffers.

The Royal City of Rabanastre.

The Minstrel's Ballad: Shinryu's Domain was added as a new Extreme difficulty trial for players.

The Unending Coil of Bahamut (Ultimate) was added in patch 4.11 as the first Ultimate difficulty raid, intended only for the most advanced players. A new treasure dungeon was added in

The Hidden Canals of Uznair.

The Grand Companies' Adventurer Squadrons system was expanded to feature exploration of certain instanced dungeons as party members. A new introductory quest for the Hildibrand Manderville questline was implemented, as well as the Kojin beast-tribe quests. In addition, several new gear sets were added into the game through dungeons and recipes. Lastly, the new housing area of Shirogane also now allowed for players to purchase housing and apartments in the facility and the housing relocation feature was added into the game.

Astragalos, which featured a new game mode called Rival Wings, allowing teams to create Illuminati machina to fight each other with. 4.15 also introduced Performance Actions for

Bards, allowing players to create their own music using a variety of instruments.

Released on January 30, 2018, Rise of a New Sun saw the Scions travel once more to Doma, to investigate rumors that Gosetsu and Yotsuyu had survived the collapse of Doma Castle, only to receive an unexpected proposal of peace from Garlemald.

Along the way, the Warrior of Light travelled to

Hells' Lid and got tied up in the affairs of

The Four Lords, facing off against the auspice Byakko at

The Fractal Continuum (Hard) was introduced as a additional dungeon, while the Omega raid series would continue in

The Praetorium were adjusted such that players could no longer skip cutscenes within them in order to improve the experience for new players running them for the first time.

A new system called the Duty Recorder was added, allowing players to record their experiences in certain duties. The Adventurer Squadrons system was expanded to include more playable dungeons. Some other things were also implemented, such as the Ananta Beast Tribe quests, updates for the inventory, glamour, performance, and plot purchasing systems, Subaquatic Voyages, and adjustments for the Lost Canals of Uznair and for the EXP rates for crafters. The Feast PvP mode also received a new map in the Crystal Tower Training Grounds, as well as rule revisions and ranked team matches.

Patch 4.25 included a new chapter for the Hildibrand Manderville questline. It also introduced a new sidestory in

The Forbidden Land, Eureka Anemos, which players can explore to upgrade their Eureka Weapons.

Released May 22, 2018, Under the Moonlight saw the peace talks in Doma continue with a prisoner exchange at

Castrum Fluminis, while the Scions learned that the Ascians may be pulling strings behind the scenes.

The Return to Ivalice raid series continued in

The Ridorana Lighthouse, while the Four Lords storyline introduced

The Swallow's Compass. Normal difficulty raids were added to the Duty Roulette. 4.31 saw a new Ultimate raid added in

The Weapon's Refrain (Ultimate), 4.35 introduced a new Deep Dungeon in

Heaven-on-High, and 4.36 continued the Eureka storyline in

The Great Hunt for Rathalos.

The Doman Reconstruction storyline was added, allowing players to donate unwanted items to the Doman Enclave to aid in its restoration. New beast tribe quests were added with the Namazu, focused on crafting and gathering. Other additions included ew sounds and animations were added for the Performance action, guestbooks and mannequins for housing, and a new custom delivery client in Kurenai. Patch 4.3 also introduced cross-world Linkshells, allowing players to create Linkshells with players from other servers, and 4.35 continued the Hildibrand storyline.

Released on September 18, 2018, Prelude in Violet saw the Eorzean Alliance make preparations for war as Garlemald moved to reclaim Ala Mhigo. The Scions searched

The Burn for a missing compatriot and found themselves grappling with a mysterious illness.

Saint Mocianne's Arboretum (Hard) was added as an additional dungeon, and the Omega raid series ended with

Hells' Kier, and the final treasure dungeon of Stormblood was added in

The Shifting Altars of Uznair. 4.45 saw the continuation of the Eureka storyline in

The Forbidden Land, Eureka Pyros, as well as the Hildibrand storyline.

Additonal adjustments were made to role actions, PvP, the Ceremony of Eternal Bonding, the Manderville Gold Saucer, and the Doman Reconstruction. Players could now be promoted to the rank of Captain in their Grand Company.

Much like the final patches of previous versions of the game, A Requiem for Heroes was split into two major releases on January 8 and March 26, 2019, in addition to smaller patches. The main scenario saw all-out war break out between the Alliance and the Empire in

The Ghimlyt Dark, as more Scions fell to the ailment imploring them to "throw wide the gates".

The Orbonne Monastery and

The Wreath of Snakes, respectively. 4.55 concluded the Eureka storyline in the

The Forbidden Land, Eureka Hydatos, ending in a raid in the first open dungeon,

The Baldesion Arsenal, allowing up to 56 players to enter solo or with a party. 4.56 saw the finale of the Hildibrand storyline, as the Warrior of Light faced a familiar foe on

Blue Mage was introduced as a limited job designed for solo play, along with a new activity known as

The Masked Carnivale.The World Visit system was introduced, allowing players to travel to other servers in their data center, with some restrictions. 4.55 introduced

As with his Batman/James Bond teases for Final Fantasy XIV: Heavensward, director Naoki Yoshida wore a Scarlet Witch shirt to the announcement event to tease a new upcoming class. Scarlet Witch is a synonym for Red Mage. At another event he wore a Spider-Man shirt to tease a different class, which was a much more obscure connection - namely the similar spelling between film director Sam Raimi, who directed the 2000s Spider-Man trilogy, and Samurai. 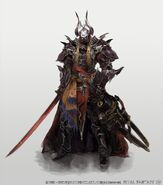 The Japanese subtitle of the expansion is 紅蓮の (Guren no Riberētā?), which translates to "Liberators of the Crimson Lotus". However, the kanji 解放者 (Kaihōsha?) is meant to be read as リベレーター (Riberētā?) in accordance with the furigana provided.