PC, Macintosh, PlayStation 3 (retired), and PlayStation 4
Final Fantasy XIV: Heavensward is the first expansion pack of Final Fantasy XIV, announced at the 2014 Fan Fest in Las Vegas. It was released on June 23, 2015. A Mac version was originally planned to launch on the same day as Microsoft Windows and PlayStation 4 versions, making it the first Final Fantasy title on Apple's personal computer. The Mac version was briefly recalled by Square Enix due to early stability issues[1], but has since been restored as a digital-only game at the Square Enix Online Store.

A benchmark program for Heavensward was released on April 27, 2015, featuring support for DirectX 11 and Au Ra character creation.

With the update for patch 5.3 on August 11, 2020, the Heavensward expansion is now included in the Starter Edition of the game.

The expansion automatically increases the level cap to 60 for all disciplines. A new playable race, the horned Au Ra, and multiple new jobs were introduced. One new job was announced for each of the three roles: the Dark Knight for Tank, the Astrologian for Healer, and the Machinist for ranged DPS. New job quests for existing jobs were added. Each job now has a unique level 3 Limit Break, with existing ones redistributed to appropriate classes.

All-new Primals appear, including at least one Primal created just for Final Fantasy XIV—the first of these being Ravana. New dungeons and new raids appear. A new feature allows Free Companies to create their own personal airships. New field areas in the expansion are 50-100% larger than existing ones[2], and support flying mounts, such as black chocobos, personal-scale airships, the collector's edition griffon, and a dragon who is important to the story of Heavensward.

Owing to schemes in the shadows of Ul'dah, the Scions of the Seventh Dawn have been scattered, and the Warrior of Light has been forced to flee North with Alphinaud Leveilleur and Tataru Taru. Though granted shelter by Lord Haurchefant, The Adventurer's group presses on to Ishgard, a reclusive nation locked in a never-ending struggle with dragons. But matters have worsened not only in the Dragonsong War, but the unexpected appearance of a Warrior of Darkness as a countermeasure to the Warrior of Light.

Naoki Yoshida had revealed that the first expansion of the game will let the players fly, and one of the themes will revolve around a "great conflict that spans across millennia."[3] In April 2015, Yoshida revealed "gothic high fantasy" was the key theme for art direction, while the storyline moved towards dark fantasy.[4]

Note that the below version updates also added features and adjustments to A Realm Reborn (2.x) content.

Released on November 10, 2015. The main scenario saw the Scions continue their search for their missing compatriots and the introduction of the Warriors of Darkness, antagonistic adventurers possessed of the Echo.

The Shadow of Mhach raid series was introduced in

The Void Ark. Additionally, the end-game dungeons from A Realm Reborn now award EXP for players who have Heavensward. An extreme version of the final battle of 3.0 was released in

Vanu vanu beast tribes quests were added, while airship exploratory voyages allowed teams of players to explore uncharted islands in the Sea of Clouds first-hand in

The Diadem. A new Gold Saucer attraction called Lord of Verminion was introduced, an RTS-style minigame involving minions. New Triple Triad cards and players are added, along with adjustments to Chocobo Racing. Housing had an eviction system added to handle lots owned by inactive players, as well as an Estate Sharing Function for private residences.

Released on February 23, 2016. The Scions search lead them to the depths of

The Antitower, while plans for a peace conference between Ishgard and Dravania ran into complications. A Grand Melee was held to celebrate Ishgard's joining the Eorzean Alliance.

In Azys Lla, the Scions would investigate the awakening of

The Warring Triad, facing off against Sephirot in

Alexander: Midas, and another new dungeon was added in

The Lost City of Amdapor (Hard).

Patch 3.2 added new training grounds, the Hall of the Novice for beginners, and Stone, Sky, Sea for endgame players to hone their skills. A Mentor system was introduced to compliment them. Gears of Change is revamped the way the materia system works, including allowing melds on endgame equipment[5]. Other job adjustments, such as damage calculation for tank classes, were implemented. This patch also featured the return of Hildibrand, Agent of Inquiry and new beast-tribe quests involving the Gnath. Patch 3.21 added a new seasonal small-scale PvP mode called

The Feast, and patch 3.25 introduced the next upgrade phase for the Anima Weapons.

Released on June 7, 2016, Revenge of the Horde saw the finale of the Dragonsong War, with the Warrior of Light braving

The Final Steps of Faith.

Another dungeon was added in

Hullbreaker Isle (Hard), while the Shadow of Mhach storyline continued in

The Weeping City of Mhach. The Warring Triad and Hildibrand storylines also progressed. A new feature was added to the Treasure Hunt, allowing a portal to

The Aquapolis to spawn rarely when opening Dragonskin maps.

A new set of beast-tribe quests called Mogmenders was added, involving both moogles & dragons and with an emphasis on crafting. The third phase for Anima Weapons was added. A new Frontline area map,

The Fields of Glory, was introduced. Additional Housing plots were added, and various UI enhancements such as the Raid Finder interface was added. Patch 3.35 saw the introduction of the first deep dungeon

The Palace of the Dead, which allowed for both solo and group content. In Patch 3.38, parts of the Anima Weapons quest had its difficulty reduced.

Arriving on September 27, 2016, Soul Surrender saw the Scions investigate a new spate of primal summonings. Their investigations would lead them through

The Navel before arriving in Thanalan. There they would meet with the Ala Mhigan Resistance and its leader the Griffin, and face off against the Warriors of Darkness.

Alexander: The Creator. The Warring Triad storyline would continue with a battle against Sophia in

A new system for the Grand Companies called Adventurer Squadrons was added, with the First Lieutenant rank finally made available for players to unlock. A new side activity, Wondrous Tails, features weekly challenges for special rewards. A new UI mechanism for controllers, the W Crossbar, was introduced. The Housing system was expanded with instanced apartments and personal aquariums. Support for cross-server play of certain Gold Saucer activities via Duty Finder was added. Patch 3.45 added the remaining floors to the Palace of the Dead and a new step of the Anima Weapon system.

The Far Edge of Fate was split into six separate patches. The major releases were 3.5, released on January 17, 2017, and 3.56, released on March 28. The main scenario saw the border between the Black Shroud and Gyr Abania explode into war as the Ala Mhigan Resistance launched an assault on

Baelsar's Wall, and the Alliance resort to desperate measures when a primal was unexpectedly summoned.

Sohm Al (Hard) was added as an additional dungeon. The final raid of the Shadow of Mhach storyline,

Dun Scaith, was added, and the final member of the Warring Triad, Zurvan, was faced in

The final steps of the anima weapon quests were added. An egi glamour was added for

Summoners, allowing summoners to change the appearance of their egis. Chocobo companions were now be treated as pets rather than party members, enabling greater flexibility when using them for party content. Cross-server recruitment for the party finder was added.

Patch 3.55a saw the introduction of Custom Deliveries for Disciples of the Land and Hand. A new PvP map was be added to the Feast, featuring a Sudden Death mode. A new encounter was added to Dun Scaith against Proto-Ultima. Patch 3.55b saw an overhaul of the Diadem. 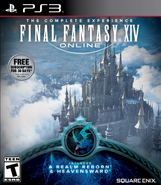 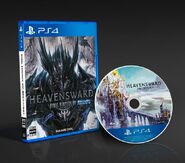 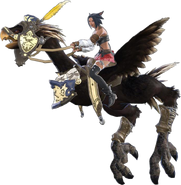 In-game render of a Miqo'te riding on a Black Chocobo.

A player flying on a Black Chocobo.

Bismarck, the Primal of the Vanu.

Ravana, the Primal of the Gnath.