The demo is divided into two playable scenarios: Phon Coast playable in wait mode with Vaan, Penelo and Basch, and Stilshrine of Miriam playable in active mode with Ashe, Fran and Balthier. The English demo is based on the Japanese demo showcased at the 2005 Square Enix Party, and the voice-overs are in Japanese, but all the menus are translated into English. Some terminology is slightly different, such as the Magic, Summon, and Gambit commands, and the Dark spell is called Dusk.

Use of the main menu is disabled, so the player can't set the party's gambits, change equipment, or access the License Board. There are no technicks available. The party has a single Esper at their disposal in each scenario, and during summoning the battle music doesn't change to the Esper music like it does in the final game. The Mist gauge also flashes a different color when full, and the symbols for gambits, Libra, and the "N" on the minimap are slightly different.

Enemies do not give LP when defeated, while loot drops are delayed slightly, have a different icon, and only contain restorative items. Some enemies have different elemental weaknesses, and abilities that have 0 CT in the final game take time to charge up in the demo.

The Phon Coast stage was first available for play at E3 2004. During the scenario, Vaan has the Esper Hashmal that he can summon at will. The enemies on the Phon Coast are different from their forms in the final game. The player's main goal is to hunt down and kill a T-Rex-type creature known as the Rockeater.

To find one, the player must defeat three Sleipnirs, because Rockeaters don't like them, and the presence of Sleipnirs is what keeps them away. The "Rockeater" boss is actually a Tyranorox, encountered in the Henne Mines as a regular opponent in the final game. The Sleipnirs are also constantly fighting with the Mandragoras.

In the Stilshrine of Miriam scenario the party must kill an Adamantitan (called Adamantoise in the demo) to collect a key that opens a door leading to a Ring Wyrm battle. The Ring Wyrm's stats are completely different from the final game; as in the final game Ring Wyrm is quite a difficult Mark at the time it first becomes available, with 128,000 HP, the Ring Wyrm in the demo sports mere 6,700 HP and doesn't use the status-inflicting attacks it uses in the full game.

Ashe has the summon Belias. 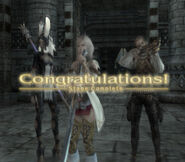