Square Enix's Yoshinori Kitase once commented, "We are thinking of providing it in a downloadable format. If we were to provide the demo overseas, it would be a completely new version."[1]

The Japanese demo takes place at Hanging Edge and is about one hour of gameplay. The demo starts at the Purge train, with Lightning and Sazh escaping and fighting the first boss that works as a battle system tutorial.

The demo follows Lightning and Sazh until it comes time to switch perspective to Snow who hires the Purge deportees to fight for NORA and Nora Estheim joins his side, leaving her son behind. The demo ends where Nora falls from Snow's grip and they bring the Pulse Vestige into the Hanging Edge. Vanille watches on and her narrator's voice says it is the Pulse fal'Cie. 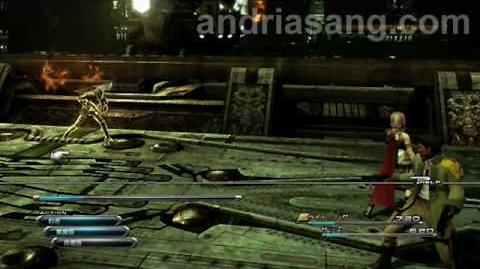 The demo differs slightly from the final game. In the final game the character executes the command chain as soon as the ATB gauge is full, although the player can execute the commands early by the press of

. In the demo, the character will not act until the player presses

, even if their ATB gauge is full. There is no Auto-Battle option, so the player must select every command separately.

Lightning starts with three ATB segments, and unlike in the final game, already possesses spells and special moves, but notably, can't use items. Lightning has both Fire and Cure in her arsenal that she can use in one turn; the demo has no paradigm system, so there is no classification between Ravager or Medic. The player can execute all the skills in their arsenal in any order. Lightning is associated with Fire spells, whereas Snow uses Blizzard.

The chain gauge is called simply "Bonus", and enemies Stagger once the player has chained enough hits, rather than by trying to fill the gauge up. The battle results screen is also different in the demo, showing the familiar star rating and elapsed time, but also the number of "maximum chain" the player managed during the battle. The "bonus" and "chain" values were merged into a single entity in the final game. Also, the "Retry" option doesn't exist in the demo; if the player gets a Game Over, they end up back at the title screen.

Visual differences to the final game[]

The back of Snow's coat is blank, unlike in the final game, where a different emblem appears on his coat during battle depending on which weapon he is equipped with. Also during battle, the chain gauge doesn't sit permanently in the corner of the screen, but disappears if the player is doing something else than attacking the enemy. In the demo, Yuj uses a completely different character model than in the final game, and instead, a regular NPC takes his place. The Battle Results screen looks different in the demo, and displays the highest chain achieved during battle.

The Final Fantasy XIII demo was actually an important turning point in the whole game's development, as it marked the point the development team finalized the game's battle system and visuals. The game's development was ridden with numerous problems, with lack of communication between different sections and the failure to set up an international focus group in time to actually implement the global players' feedback during the game development. In fact, according to the October 2010 issue of Game Developer magazine[2] the game didn't fully come together until the team was tasked with creating a playable demo to be included with Final Fantasy VII: Advent Children Complete.

Interestingly, no playable data on the game existed before the demo was created, despite the late stage in development. The team hadn't originally planned on creating a demo, but once having been commissioned to create one for the Advent Children release, the team had to accommodate it into their schedule. The demo finally realized the game in a way which unified the team, and allowed the development process to move forward from the stand-still it had been in before.