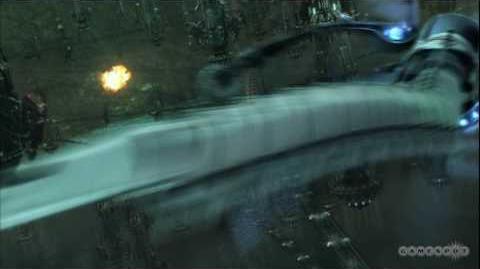 The Final Fantasy XIII announcement trailer shows Lightning fighting PSICOM soldiers in the Purge train using Antimatter Manipulation Principle (AMP) to manipulate the gravity around them. A battle demo shows Lightning battling PSICOM soldiers alone in Eden where Lightning again uses the AMP technology to manipulate her surroundings and momentarily halts the action for everyone but herself. Lightning walks through Sunleth Waterscape and the trailer ends with Lightning meeting face to face with what turned out to be the first boss of Final Fantasy XIII, but before the battle ensues the scene fades to black and the game's logo is displayed.

The video shown at Square Enix's conference was longer than the one shown at Sony's later the same day; the longer video would start with Lightning soaring through the skies of Eden and then move to the scene with the Purge train. Only the shorter version was made public.

The video was reported as "entirely real-time except for a short sequence of rendered footage showing a train". The using of in-game graphics for the trailer rather than FMVs was viewed as very impressive at the time. The press release given with the trailer described "intuitive controls" and an emphasis on real-time gameplay. The music for the trailer is "Blinded By Light" composed by Masashi Hamauzu. Hamauzu was asked to create the music for the announcement trailer, and thus "Blinded By Light" was the first track composed for Final Fantasy XIII and became its main battle theme. Its motif was later used for Lightning's musical theme.

The trailer was created to depict the concept of Final Fantasy XIII and depicted the development team's aspirations for it, but the game itself wasn't there yet. As the trailer was shown to a global audience, the team worked to visualize what they considered as their instead of showing the early development stage of the actual game. The concept of Lightning as the protagonist and the fast-paced ATB (Active Time Battle) system had already been decided.[1]

Although the visuals in the trailer are similar to the final game, pretty much everything in it was redone. Lightning never visits Sunleth Waterscape in the final game, and the visual where Lightning faces off against Manasvin Warmech is different with Lightning having a more detailed character model, the colors are lighter and Lightning's Blazefire Saber shines in the light with a brighter spark.

In the final game, Lightning never uses the AMP gravity controlling device in battle and the interface is completely different, although the idea of a scrolling ATB bar at the bottom was used for the Command Synergy Battle system developed fairly late in the game's development cycle. Lightning's name was not given for the trailer, and she was mainly known as the "female protagonist of Final Fantasy XIII". Although her name appeared in the battle demo it wasn't explicit whether "Lightning" referred to her or if it was some sort of element to do with the battle.

When making the announcement trailer of Final Fantasy XIII, a concept of Lightspeed was used as a battle system demo. In fact, nothing playable had yet been created for Final Fantasy XIII at this point, and the trailer was merely a visual demo for the feel of the game the developers wanted to portray. It appears, however, that the demo was the direct influence in developing the Overclock system for Lightning Returns: Final Fantasy XIII.

Battle system demo from the trailer.

Battle system demo from the trailer. 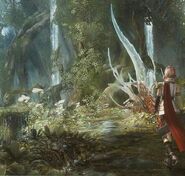 Lightning in the 2006 trailer. Her design was altered in the finalized game.