May 26, 2010
Final Fantasy XIII: Original Soundtrack PLUS is an additional soundtrack for Final Fantasy XIII that was released in Japan on May 26, 2010. It contains new tracks made for the overseas release, prototype versions of tracks, tracks used in the trailers, and three tracks used in the game but not included on the original soundtrack. The music is composed by Masashi Hamauzu.

The liner notes to the album contain a message from composer Masashi Hamauzu and his comments on individual tracks.

With the main focus of my efforts complete, I've finally had a bit of an opportunity to relax. I was so busy at the height of things last summer that I hardly remember there even having been one, but I've had enough spare time this winter and spring to take notice of the changing temperatures again. Still, projects of such a major magnitude always bring strong aftershocks in their wake, and the Final Fantasy XIII: Original Soundtrack PLUS is one such seismic event.

Final Fantasy XIII's worldwide production and release entailed the creation of assets extending far beyond the scope of the game itself, and music was no exception. Starting with the very first E3 announcement trailer theme back in 2006, there have been numerous promotional video tracks, overseas version game tracks, and alternate-take tracks that did not quite fit within the framework of the original soundtrack.

Toward the end of last year, I spoke of wanting to digitally distribute the English version of "Chocobos of Cocoon" at the very least. One thing led to another, and before I knew it I had enough songs and prototype audio tracks for a full-fledged CD. This new disc's jacket design incorporates elements not often seen in Japan, lending a unique "collector's edition" flair to an already fascinating compilation. Written commentary has been included for each and every track, so please listen with booklet in hand and come along for a backstage tour of Final Fantasy XIII's music production process.

As for myself, I think I had best go off in search of more hidden gems for the next big aftershock. Be looking forward to it!

A beautiful day with cherry blossoms in full bloom, April 2010.

Created for Jump Festa 2007, this song features interwoven motifs of "Blinded By Light" (Lightning), "Prelude" (Vanille), and the sound of footsteps (crystal). It was an attempt at seeing how far I could take layering (placing raw instrumentals on top of synthetic audio) in the way I had envisioned, so I had to be very picky about everything from sound generation to the scoring and final mixing, being sure to pick up the lines I wanted, getting the kinds of performances I could not create synthetically, adjusting the pitch and balance of the raw and synthetic audio, and so on.

On the upside, it succeeded in allowing me to create of a full orchestra from a group of only just over ten musicians, but on the downside, it was quite time-consuming. There was trial and error involved, and it ended up requiring a full month to complete. The pace picked up over time, though, and I was able to use a technique very close to this one for several songs in the actual game.

This was the theme used in the E3 2006 trailer. It was the very first song I composed for Final Fantasy XIII, followed by "Blinded By Light." I had been toying around with the idea of rearranging the ending and recording a live orchestral version, but the opportunity never came along. I would have been content even if this version had only stuck around for that year or so after E3, but as it turned out, it ended up being used in several places even after the game's release.

This was the demo version of "FINAL FANTASY XIII – The Promise". It ended up being scrapped, with the synthesizer sounds you can hear from time to time all replaced by live recordings, but a lot of people seemed to think this version was fine as it was, and I remained on the fence about what to do right up until the recording.

This was the demo version of "Saber's Edge". The final version placed a live orchestral layer on top, and the piano was swapped out as well. Toward the end of development, there was actually a problem with some of these old versions of songs being played in the game for an unknown reason. I first noticed when someone said, "Hey, the boss battle music just got cooler all of a sudden. Did you change it again?" Well, hey. Those kinds of things happen every once in a while!

This is an extended version of "Defiers of Fate". I had only planned on using the song in a few select places originally, but I miscalculated the number of tracks I would need to cover all of the scenes and ended up having to use it in quite a few different places.

The original version of "Hope's Theme" was mocked up on piano. I wanted to go with an acoustic guitar for Hope in the actual game, so I ended up hiding this version away without letting anyone listen to it. Quite a few other issues developed along the way, and I ended up abandoning it altogether. It was something of a mixed bag, so the version included in this CD is only a portion of the full track. Sorry!

We tweaked the lyrics for the overseas versions of the game, so we rerecorded this song after we had finished up the domestic version. I think if we ever had the chance to do a live concert version, this would be the one.

"The Gapra Whitewood" had actually been an instrumental song called "Gapra Forest" until midway through development. We then made a second version with lyrics, and decided to use both. There were some twists and turns along the way, though, and this instrumental version never ended up being used.

This is a version of "Fighting Fate" with the chorus removed, rearranged to fit with the lines of a movie and made slightly shorter than the original version as a result. The scene in question was one with intense fighting and a lot of speech, and I think this arrangement did a good job at remaining subtle in the background so as not to interfere with the spoken lines.

A number of songs, including the main theme, were altered or replaced in the English version of Final Fantasy XIII. "Chocobos of Cocoon" was one of them, featuring all-English lyrics. The vocalist was Frances Maya, just as in the domestic version. The Square Enix localization team, Frances, and I put a lot of careful thought and consideration into the choice of lyrics, and I think the final song has a very cohesive feel as a result.

This was the early take on "Lightning's Theme". In this version, piano was central in the refrain. It was a small enough undertaking that I ended up having it rearranged with a live recording for the final version, but the synthesized version was also rather popular, and we considered using it alongside the recorded one. I remixed this version for inclusion on the CD.

This was a demo track I created at the beginning of development, before I had a grasp on the game's mood and setting. It was modeled on the structure of Final Fantasy X's "Assault" and titled "Assault 2". I had still needed a drum part and some other things to bring it closer to the original song, but it ended up needing to be rearranged for the Warsaw National Philharmonic Orchestra anyway (later turning into "Fang's Theme"), and it never quite got there. It might be fun to try to create a dryer version like that sometime, though.

This was an early demo version of "Can't Catch a Break". I had a guitarist friend from my college days, Toru Tabei, come into the composition booth and play for me. It was only intended to be demo track, so you can hear us shouting out and horsing around a bit.

It has been quite a while now since synthesized audio began to have an influence on the world of orchestral music. I think it will be hard to ever create something synthetic that's more convincing than a live performance, but at the same time, there are a lot of people with whom it really strikes a chord; gamers and game music fans in particular. The advances in game music in recent years have been remarkable, and the amount of data you can fit into a game has increased to such a degree that it can't even be compared to what we had in the past. Still, we older gamers grew up accustomed to the shackles of onboard sound generators, and I think that familiarity with clear, distinct sounds and very regular rhythms is very big for us. If you ask people who don't really play games, on the other hand, they will agree overwhelmingly that a genuine performance is better for music.

How to take into account those two differing views is always a major issue of concern, especially in the Final Fantasy series, which, traditionally, has made use of hardware-generated music. There are also factors to consider beyond music. Other things have changed over time as well, like the greater movie file sizes resulting from advances in graphical quality, and the balances there have to constantly be taken into account as well. We game music composers are still very much in a transitional period. I often hear things like, "Isn't synthetic music good enough?" but that means sampling, and that there won't be a musician playing the piece who actually understands it. I think we tend to dance around the issue of what that really means.

Then again, even if it is recorded live, the recording process involves cutting and pasting pieces of the performance together. Some people may say that at that point there really isn't any difference. Synthetic audio is based on the laws of physics, employed to work with the atoms that make up our human ears and brains. At the end of the day it may well be that it plays to our sensitivities and moves us in a strange but definable way. This "M106 Final Battle Prototype+" formed the foundation for "Nascent Requiem", but I also reedited it for this CD as an opportunity to demonstrate the issues with authentic and synthetic audio.

I tweaked the verse for this version, greatly extending the overall length. The editing was done to allow the song to be aligned with the scene in such a way that the chorus would fall in just the right place.

A lot of people had expressed a burning desire to sing Sunleth. By all means, sing along to this karaoke version at home or at a friend's house. 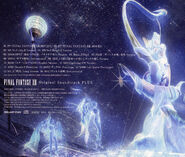