On a continent to the east... A majestic empire is said to exist... The land of Aht Urhgan

Service for Treasures of Aht Urhgan commenced on April 20, 2006 (JST). 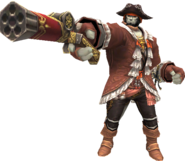 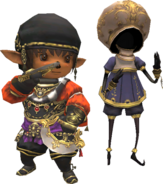 This list does not include reskinned enemies of the same genus or unique bosses.

Listed in order of implementation.

The story begins as the Empire of Aht Urhgan opens it borders to visitors after years of isolation and has also started to actively recruit mercenaries.

The Adventurer obtains a boarding permit from the Tenshodo and takes a ship from Mhaura to the Near East. He arrives at Al Zahbi and delivers a supplies package to the Immortals at the behest of Naja Salaheem, the president of a mercenary organization. Upon successful completion of this task, the Adventurer pledges himself as a mercenary to Naja Salaheem's company, Salaheem's Sentinels, and proceeds to undertake missions as a mercenary through the Commissions Agency.

Some time later, the Adventurer is introduced to Raillefal, a former Elvaan knight from San d'Oria who has recently joined Salaheem's Sentinels as well. Raillefal is suspicious of the Empire and decides to find out more about it, befriending the Yagudo monk Gessho in the process. Gessho shares information about a national treasure sealed in the Hall of Binding known as the Astral Candescence. It is said to have the power to stir astral wind and emanate a sweet inaudible melody that draws people to it. However, the Astral Candescence is housed in a part of Al Zahbi that can easily be attacked by the three beastmen factions residing in the Near East.

The Adventurer sees through Raillefal's disguise. Raillefal, who is actually Prince Trion, sends the Adventurer to deliver a letter of his findings to Halver back in San d'Oria. At Chateau d'Oraguille, Halver, Prince Pieuje and the commanders of the two knight orders learn about the situation in Aht Urhgan from Trion's letter, the Adventurer's own account and that of Travialce, a bodyguard who had secretly been sent to protect Prince Trion from the shadows. On discovering that Aht Urhgan might be on the verge of a conflict on the scale of the Crystal War, Prince Pieuje calls for an emergency summit with the three other nations of Vana'diel.

The Adventurer and representatives of the four nations convene in Ru'Lude Gardens. Their discussion reveals that the Astral Candescence sealed in the Hall of Binding is guarded mainly by mercenaries and Aht Urhgan's most elite soldiers, the Serpent Generals, and yet kept in a poorly defended quarter of Al Zahbi. Shantotto deduces that the Astral Candescence is in fact bait to lure beastmen to attack the city but cannot find the reasoning for this. In order to obtain more information, the allied nations task the Adventurer to return to Aht Urhgan and find out more through his work as a mercenary.

Learning of the events in Jeuno, Raillefal returns to San d'Oria. The Empress of Aht Urhgan, in her discussions with the Grand Vizier, gets word of the summit held in Jeuno as well as the Adventurer attendance, claiming that they have taken the bait.

Salaheem's Sentinels receives a commission from the Aht Urhgan Archeological Research Institution (A.A.R.I.), which conducts investigations of the ancient Ruins of Alzadaal. Naja decides to send the Adventurer for the job of patrolling the ruins but doesn't reveal to him that the commission had specifically requested for him.

During the Adventurer's patrol, he meets with Ghatsad, his assistant, as well as two Immortal bodyguards, Rishfee and Amnaf. Ghatsad explains that the ruins date back 900 years to the reign of Emperor Alzadaal, but appear to be fully functional. He reveals that the A.A.R.I.'s true purpose in the ruins is to locate missing Astral Candescences, as the one in Al Zahbi is not the only one in existence. He requests the Adventurer's aid in the search for the missing candescences and provides an astral compass in the hope that it would pick up astral waves emanating from other candescences during the Adventurer's travels in Aradjiah. He also requests for his identity as chief of the A.A.R.I. to remain a secret.

The Grand Vizier Razfahd informs Empress Nashmeira that the "bell" has been set on the mercenary Adventurer and that their efforts are going according to plan. When Razfahd orders Raubahn to deal with otherworldly fiends who threaten their progress, Nashmeira demands to know more about them. The Immortals report that there have been rumors of a ghost ship in recent years menacing the waters of the Cyan Deep. This ship, bearing the name of the famous shipwreck Ashu Talif, is said to actually be the Black Coffin, a pirate ship of the lost Kingdom of Ephramad. The rumors continue to say that Prince Luzaf, the ship's captain who perished 200 years ago has also returned.

The Empress wishes to find out more, but the Immortals dismiss the rumors as being set by the rebel group Seagull Phatrie and Razfahd is reluctant to mobilize troops based on a rumor. Nashmeira instead tasks the court puppetmaster Aphmau and her automaton Ovjang to find out more with the help of mercenaries.

At Salaheem's Sentinels, Naja receives orders from the Empress to uncover the rumors of the ghost ship. She assigns the Adventurer to assist Aphmau in this investigation. Arriving at Nashmau, the Adventurer meets with a Qiqirn ghost hunter Pyopyoroon who teaches him how to communicate with a special ghost found in the cemetery on Azouph Isle. The ghost, a knight by the name of Sir Jazaraat attacks the Adventurer before leaving an Ephramadian gold coin on his gravestone.

Heeding Naja Salaheem's orders on a reported sighting to the west of Dvucca Isle, the Adventurer arrives at Arrapago Reef there and is granted passage to the Black Coffin on a cutter run by a ghost using the Ephramadian gold coin as his fee. Although the Adventurer is ambushed on board the Black Coffin, Gessho shows up to assist him and together they defeat the ship's ghostly crew. However, they are cast off the ship by its captain's supernatural powers.

When the Adventurer returns to Al Zahbi to report to Naja on what had occurred, she informs him that he has received a personal invitation to the palace from the Grand Vizier and forcefully tags along, citing the importance of her knowledge of palace etiquette. The Empress receives an audience with Naja and the Adventurer and presents the Adventurer with a reward of a Glory Crown. Naja later claims the Adventurer's reward as her own outside the Aht Urhgan Whitegate.

Razfahd returns from the warring Eastern Front to learn that the Empress had used his name to invite the Adventurer to the palace. He chastises her, telling her to only perform the functions she is entrusted with and to leave Aht Urhgan's dark secrets to him. He then reminds her that she cannot do anything alone.

Treasures of Aht Urhgan adds 24 new music tracks to Final Fantasy XI. All tracks from the expansion are composed and arranged by Naoshi Mizuta with the exception of composer credits to Nobuo Uematsu for the Chocobo theme.

Two new chocobo tracks are introduced as a part of Treasures of Aht Urhgan, due to the introduction of a Chocobo Circuit where players can participate in Chocobo races.

Following the tradition started in Chains of Promathia, a new track "Vana'diel March #4" is played once in place of the "Vana'diel March" on the Final Fantasy XI title screen after Treasures of Aht Urhgan is installed.