Truth or illusion? See it with your own eyes.

Three new Advanced jobs were released as a part of Rise of the Zilart. Although the Summoner job was added in the same update, it can be unlocked without having the expansion installed and registered. 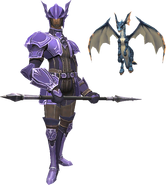 Players are required to attain Rank 6 by defeating the Shadow Lord as a part of their nation rank missions before they are able to start on Rise of the Zilart main story missions.

The three nation's stories are also expanded upon in in this expansion, resulting in the rise to Rank 10.

New quests are also available for players to undertake.

This list does not include reskinned enemies of the same family or unique mission bosses.

Listed in order of implementation.

The Adventurer, who drives the storyline forward, there are a number of other non-playable characters that take on significant roles in the Rise of the Zilart storyline.

(The story begins immediately after completion of the original Final Fantasy XI story.)

The Adventurer arrives at Norg and is greeted by Lion. She is surprised that he does not remember the events that transpired in the Throne Room and attributes this to shock. This triggers a flashback of what had happened.

After the defeat of the Shadow Lord who reveals himself as Raogrimm, the Archduke of Jeuno Kam'lanaut and his brother Eald'narche had appeared and revealed themselves as Zilart, an ancient race that was supposedly destroyed thousands of years ago. They had planned on reviving the crystal line and opening the Gate of the Gods in order to bring about Paradise, the land of the Gods. However, they were not able to set their plan in motion twenty years prior, at the end of the Crystal War, because the "noise" caused by the Shadow Lord blocked the flow of power from deep within Vana'diel, not until now that the "noise" has ceased.

They called forth the Warriors of the Crystal to dispose of everyone in the Throne Room. Raogrimm took a hit for Zeid after his attacks proved to be futile, and the Adventurer was struck down by a Thunder spell. At that point, Lion appeared in the Throne Room and helped the others to escape while Raogrimm used the last of his energy to transform into the Shadow Lord and slow the advance of the Warriors of the Crystal before he was ultimately defeated.

As the Adventurer recovers from the flashback, Lion gets him to meet her father, Gilgamesh, who is also the leader of Norg. Gilgamesh sends the Adventurer to explore the Temple of Uggalepih where he met with a strange old woman who might be able to aid them. Aldo appears in Norg to inform them that his sister Verena has gone missing and this appears to be related to the recent developments regarding Kam'lanaut's plans.

After receiving a key to reach the deeper depths of the temple from the Kazham Chieftainess Jakoh Wahcondalo, the Adventurer arrives in the Sacrificial Chamber, deep within the Den of Rancor. There, they are attacked by a group of Tonberries before one of them reveals herself to be Grav'iton, the old woman Gilgamesh had met and a scholar of the lost civilization known as the Kuluu.

Grav'iton explains that ten thousand years ago, the Zilart devised a plan to bring the power of the five giant crystals beneath Vana'diel together to open the way to Paradise. They would use Delkfutt's Tower, the crags and the crystal line to harness and control the power of the crystals. This would then be used to power the floating island of Tu'Lia, which would serve as the Gate of the Gods.

However, the Kuluu and followers of the Goddess, the Dawnmaidens opposed this plan and attacked the northernmost ark, sabotaging the Zilart's plans and causing a massive explosion of blinding light. This destroyed the Zilart, sank their capital into the sea and laid waste to the Northlands. The Kuluu on the other hand degenerated into the Tonberry.

Grav'iton urges the Adventurer to gather 8 fragments of light, found embedded in cermet headstones scattered across Vana'diel, and bring them to an ancient temple on the island of Zepwell. There, the Dawnmaidens would be able to guide his path. She hands over the first of the 8 fragments and disappears.

After gathering the other 7 fragments of light, the Adventurer finally arrives at the Chamber of Oracles where he faces off against a trio of Antica before meeting with the Dawnmaidens. They tell of how the five Ark Angels, as well as the five main races of Vana'diel, were created from the crystals. They also explain that the elder of two Zilart princes made a "connection" with the crystal and it was from there that he saw the vision of the Zilart reopening the gates to Paradise. The Dawnmaidens then urge the Adventurer to go to Delkfutt's Tower to stop the Zilart princes.

Back in Jeuno, Lion informs Aldo that she saw a bunch of Ducal Guards led by Captain Wolfgang taking Verena towards Delkfutt's Tower. Together with Zeid, the three of them go to Delkfutt's Tower to confront the Archduke.

In the Stellar Fulcrum of the tower, they encounter the Archduke who tells them of its significance. It is a control tower used to open the path to Tu'Lia once the power in its heart, the Chrysalis Core, is regenerated. He explains that he had been slumbering in this tower for ten thousand years after the meltdown, until Raogrimm's contact with the crystal in the Multinational Expedition allowed some energy to flow back into the tower.

When the three of them challenge his will, he summons the Crystal Warriors to attack them. The Adventurer arrives at the Stellar Fulcrum and defeats the Archduke in battle.

As Kam'lanaut laments his defeat and that the Crystal Warriors did not aid him, his brother appears and states that the Crystal has since forsaken him. Although Kam'lanaut was originally needed to revive Tu'Lia, Eald'narche claims he has found a new way to open the way. Eald'narche lets Kam'lanaut die and reveals himself to be the elder of the two Zilart princes whose growth was halted when he came into contact with the crystal.

He brings out Verena and the head of the Shadow Lord and claims she is his key to the Chrysalis Core. Because Verena's soul can resonate with the beastmen, Eald'narche could use her to tap into the "Memory of the Ancients" stored within the Talekeeper and reactivate Delkfutt's Tower's core. He succeeds in doing so and dumps an unconscious Verena. With Tu'Lia activated, Eald'narche invites the Adventurer to see paradise with his own eyes, and states that the Adventurer can do this by proving himself in Ro'Maeve. He then teleports to Tu'Lia.

Lion returns to Norg to seek help from her father and finds out that Ro'Maeve is located beyond the Sanctuary of Zi'Tah. Verena is taken back to Jeuno where she recovers. Gilgamesh sends the Adventurer to Ro'Maeve and he discovers the Hall of the Gods, but his path is blocked by a grate with a crystal-shaped depression.

Gilgamesh recalls a Mithra who tried to sell a crystal she had found in the Sanctuary of Zi'Tah whilst in Norg and orders the Adventurer to find her. The Mithra, Maryoh Comyujah, is found over at Rabao and she agrees to hand over the crystal in exchange for an ancient papyrus map found within the Quicksand Caves. Although the map is guarded by an Ancient Vessel, the Adventurer returns to Maryoh with it and gets hold of the cerulean crystal.

The Gate of the Gods[]

The cerulean crystals allows the Adventurer, together with Aldo and Zeid, to pass through the grate in the Hall of the Gods and he is greeted by the Dawnmaiden Yve'noile. She explains how the Zilart divided the power of the crystals elementally and contained them in smaller crystals. However, when the Meltdown occurred, the energy from these crystals were simultaneously released and accumulated in the bodies of all living things on Vana'diel and thus all mortals are imperfect. Yve'noile states that the Zilart are bound by their cursed past and begs the Adventurer, Aldo and Zeid to defeat Eald'narche and free him from his crystal binds.

When the Adventurer arrives at the core of Tu'Lia, the Celestial Nexus, Lion, Zeid and Aldo are already battling Eald'narche, but he overwhelms them easily with his power. Eald'narche offers the Adventurer one last chance at joining him in Paradise. When he refuses, Eald'narche sets himself onto his control platform and attacks.

When Eald'narche is defeated by the Adventurer, he refuses to submit and tries to restart the Crystal Line before it is completed, in order to cause a Meltdown to destroy the world, not unlike ten thousand years ago. As the Crystal Line powers up, Zeid and Aldo watch on helplessly, but Lion decides to sacrifice herself to prevent the catastrophe, throwing herself into the crystal core. As the crystals power fades, Eald'narche realizes his ambitions have failed. Yve'noile appears before him and beckons him to return to the crystal.

With Lion gone, Aldo, Zeid and the Adventurer leave Tu'Lia for good. Upon returning to Norg, Gilgamesh mourns the loss of his daughter, who he reveals to have been adopted during the Great War, but also states that he is proud to be her father for saving the world.

At the Tenshodo headquarters in Jeuno, Verena and Aldo's henchmen are glad to welcome him back safely. When Verena discovers that Lion had sacrificed herself to save Vana'diel, she states she can still feel that Lion is alive somewhere, but weakened, and encourages the Adventurer to believe in her.

Aldo tells the Adventurer to get some well-deserved rest as he feels that the adventure is just beginning.

Much of the new tracks from Rise of the Zilart are featured in expansion exclusive content. This includes new area music, party battle music for outdoor and dungeon areas as well as cutscenes. With the exception of battlefields, any form of solo play will still feature the original battle music instead of the new tracks.