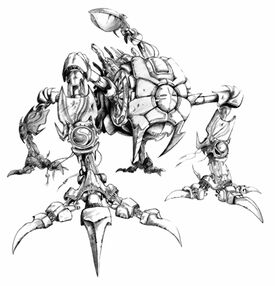 Pencil illustration of Omega Weapon from Final Fantasy V. This android, arachnid-like entity sports a variety of devastating abilities and is a recurring Superboss in the series. Over its next several appearances in Final Fantasy VI, Dirge of Cerberus, and other games, Omega Weapon's structure has morphed drastically, even taking the form of a metallic humanoid-quadraped hybrid. In most cases, however, Omega has retained the image depicted in this sketch.
Recently featured: Ring of Fates Characters - Sending - Barrier City
See all Featured Images - Suggest a Featured Image
Retrieved from "https://finalfantasy.fandom.com/wiki/Final_Fantasy_Wiki:Featured_Images/Omega_Sketch?oldid=2715397"
Community content is available under CC-BY-SA unless otherwise noted.