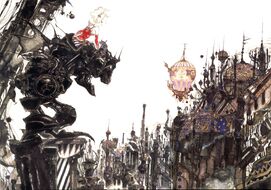 "The ancient War of the Magi... When its flames at last receded, only the charred husk of a world remained. Even the power of magic was lost... In the thousand years that followed, iron, gunpowder, and steam engines took the place of magic and life slowly returned to the barren land. Yet there now stands one who would reawaken the magic of ages past and use its dreaded power as a means by which to conquer all the world. Could anyone truly be foolish enough to repeat that mistake?"