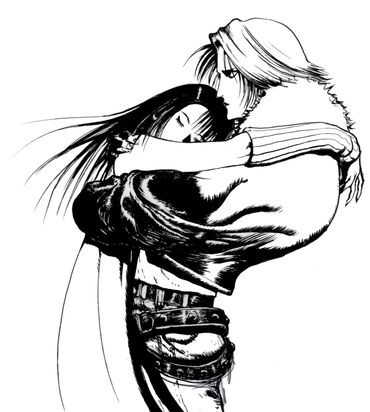 Detail of the logo illustration of Final Fantasy VIII, by artist Yoshitaka Amano. Thus far, every single entry in the main series has featured a logo designed by Amano, usually illustrating a theme or character of great importance in the game. Final Fantasy VIII was the first in the series to feature romance as the main focus of its plot, and thus the logo was designed to incorporate Squall Leonhart and Rinoa Heartilly embracing.

The design was referenced within the game itself in one of its FMV cutscenes.