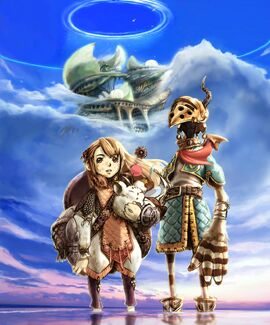 Artwork by Toshiyuki Itahana depicting a Clavat and a Yuke, two of four races that inhabit the world of the Crystal Chronicles series. Clavats are the closest of the Crystal Chronicles tribes to resemble Humans and are usually the main characters of the games. Yukes are tall, slender creatures with vast amounts of knowledge who wear suits of armor that conceal their faces.