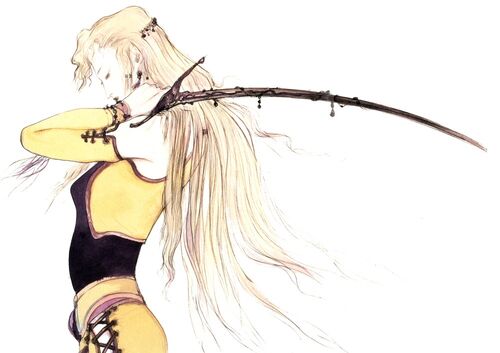 Product of genetic engineering, battle-hardened Magitek Knight with a spirit as pure as snow.

Imperial General Celes Chere, from Final Fantasy VI. When the player first meets Celes, she has been branded a traitor for an unspecified reason, which is never revealed. Celes joins the Returners and contributes to their effort up until her apparent betrayal and rejoining the Empire.

The second half of the game begins with her as the leading character. Believing to be the last person left alive, she attempts to commit suicide by jumping off a cliff into the ocean, yet she survives and later discovers proof that others may have survived the cataclysm.

Celes' in-game sprite greatly differs from her conceptual artwork: the former depicts her wearing a white cape and green leotards. Her song theme, simply called "Celes" shares the central melody with one of the most notable pieces in the series, the Aria di Mezzo Carattere.