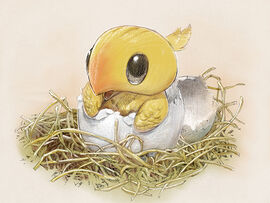 A Chocobo hatchling, from Final Fantasy XI. Chocobo Raising is an activity included in the Treasures of Aht Urhgan expansion pack. Adventurers can own and care for their own chocobo, from the egg until its eventual retirement. There are many advantages to doing so, including the ability to raise a chocobo specially to suit the adventurer's own needs. 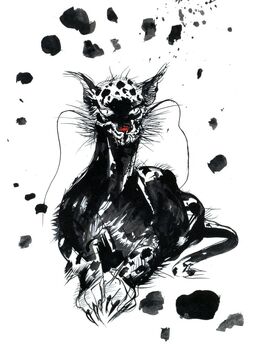 The Coeurl is one of the most recurring enemies in the series, having made its debut in Final Fantasy II and appearing in every subsequent game and (and most of the spin-offs) except for Final Fantasy III and Final Fantasy V. Its appearance resembles that of a cat, cheetah, or leopard, often with very large whiskers. The Coeurl is renowned for using a move called Blaster which does large amounts of damage or, in some cases, causes Instant Death. 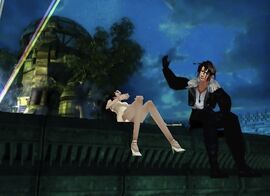 A screenshot from Final Fantasy VIII depicting Squall Leonhart and Rinoa Heartilly at a rather awkward moment, having just finished the concert organised by Selphie at Balamb Garden, in honour of Squall's promotion to Commander of SeeD.

The logo for the upcoming Final Fantasy spin-off Theatrhythm Final Fantasy for the Nintendo 3DS. The title is a portmanteau of "theatre" and "rhythm", describing its genre as a "theatre rhythm game". Players will have to tap and follow various coloured notes accompanied by music. The logo itself parallels the Dissidia Final Fantasy logo with Cosmos and Chaos, albeit in a super-deformed style. Characters in the game are likewise present in a similar style, matching their appearance in Kingdom Hearts Mobile. 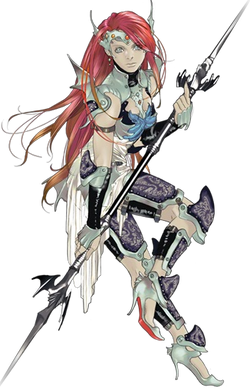 Artwork of the Dragoon Barbara from Final Fantasy Dimensions. Barbara appears in the tale "Tome of Light, The Dragoon's Tale: Last of the Dragoons", the first additional tale to be released for the mobile game after the base game. She is the sole survivor of the Dragoons of Deist and was raised by Wyverns, and grants the Dragoon job to the player's party. Barbara is only the second official female Dragoon in the series after Freya Crescent.

Barbara's backstory draws elements from Ricard Highwind of Final Fantasy II, who was also the last Dragoon from a village called Deist. This became a trend in the game, with numerous characters taking their names from previous Final Fantasy characters, such as Dr. Lugae and Matoya. 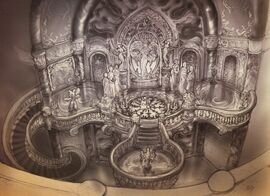 Artist's rendition of luxury Outer Continent resort from Final Fantasy IX, the Desert Palace. An oasis of elegance amongst cruel sandstorms and illiterate dwarves, this illustrious mansion is maintained by arms dealer Kuja, who also moonlights as a virtuoso poet.

The balcony pictured features marble walls, aromatic bouquets, and angelic statues, lit gently by the decadent light of candelabras. Secret passages are provided for the privacy of our guests, though they are requested to leave any encountered Bloodstones intact.

Reserve your stay now by calling 808-KUJA or visiting www.peaceisbutashadowofdeath.com! Desert Palace: because the Conde Petie Inn just won't do.

The latest Downloadable Content for Dissidia 012 Final Fantasy, featuring Terra in a "Striped Dress", Bartz as a "Dancer" and Shantotto wearing a "Wedding Dress". Bartz is the only one of the three to wear his outfit in his original game.

All of the content must be downloaded at the PlayStation Network via PlayStation 3, PlayStation Portable or the Media Go freeware by Sony, by using either codes distributed in certain packages described below or by direct purchase. In order to activate the downloadable content, the data must be imported into the PSP's Memory Stick. 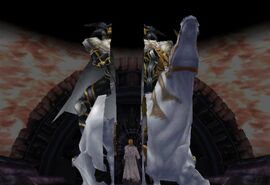 Screenshot of Odin being destroyed by Seifer in Final Fantasy VIII. Odin appears at the beginning of the battle and attempts to dispatch Seifer with the Zantetsuken. However, Seifer reverses the Zantetsuken to bisect Odin, emerging unharmed. Odin's sword flies from his grasp and cuts open a hole between dimensions, allowing Gilgamesh to cross over and take up the Zantetsuken to assist Squall and his friends in Odin's place.

As stated in Odin's profile in Dissidia, the incident is not a fond memory for him. 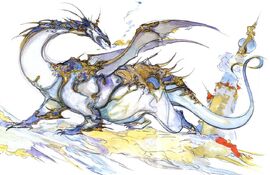 Artwork by Yoshitaka Amano depicting a wind drake from Final Fantasy V. The Wind Drake's ornamentation suggests it is Hiryu, who belongs to Princess Lenna Tycoon. This pose drawn by Amano was used in the logo for Final Fantasy V, though the illustration is simplified to depict a generic Wind Drake. The tradition of basing Final Fantasy logos after Amano's artwork started in Japan with Final Fantasy IV, and continued into Final Fantasy V and all games in the main series since. 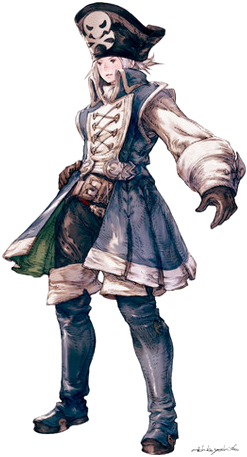 Artwork by Akihiko Yoshida showcasing an alternate costume for Vaan in Dissidia 012 Final Fantasy. This costume was released as downloadable content, and unlike most of the alternate costumes in the game, was not based on a design found already in the series. Though Vaan's dream in Final Fantasy XII is to become a Sky Pirate, he does not adopt a traditional costume like this one in Revenant Wings. As Yoshida designed something similar for Balthier's appearance in Final Fantasy Tactics: The War of the Lions, it may have been an alternate concept he considered.

Recently featured: Aki Ross Render - No Phoenix Down for You - TA2 Judge
See all Featured Images - Suggest a Featured Image
Retrieved from "https://finalfantasy.fandom.com/wiki/Final_Fantasy_Wiki:Featured_Images/Archive_X?oldid=1231236"
Community content is available under CC-BY-SA unless otherwise noted.