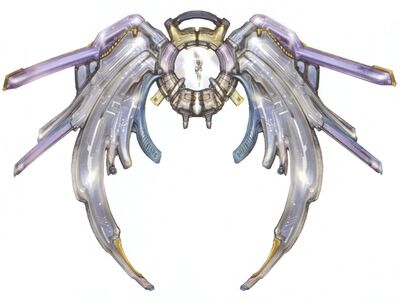 The concept art of Adel's Tomb, from Final Fantasy VIII. The Sorceress Adel, tyrant of Esthar, had grown too powerful for any man or army to destroy. The only way to defeat her and rid the country of her rule was to contain her, indefinitely, in suspended animation. Luring the Sorceress into what later became known as the Sorceress Memorial under the pretense of capturing Ellone, the resistance, led by Laguna Loire, snapped the trap and captured Adel. The container was launched into space and brought to rest in orbit around the planet.

The ordeal, however, was not without side effects: The Sorceress remained conscious even from within her prison, and her influence caused the worldwide radio interference, which rendered most wireless technology useless for the next 17 years, up to the events of the game.