Archived fights, from the Dragon's Neck Colosseum, from week 11 through week 20! This is only an archive. All these votes closed a long time ago, so don't bother voting.

As promised, a Kuja fight! Sorry for the delay. I guess life takes over sometimes.

One Person: Kuja's one of the only FF villians I repsect. Appearances aside, he's a great villian. Sinister, manipulative, gets ultimate power and he tops it off with a big ego, it would have to be if he was going to destroy all of existence because he wasn't going to be in it for much longer. I don't know why more people don't worship and are feakishly obsessed with him. He's actually a good villian. Seymour was just stubborn and didn't stay dead.

It's two of Final Fantasy's most clownish villains!

Maybe if it were Seymour or Shuyin I would consider it a fair match, but not in this case. Three cheers for nihilistic evil clowns! But seriously, LeBlanc isn't even really evil or anything, and although both of them were funny, Cefka was actually pretty insanely evil. He further defined (for better or for worse) what all the villains would be like in the series from that point on. ~ *ZeromusX

One Person: Well I don't really like Kefka but, he's achieved alot as a villian. That and I don't know who LeBlanc is but there's no way she's taken seriously as an antagonist with an outfit like that. Perosnally Kuja would have been a much better character to put up against Kefka

A message for Kuja fans[]

I have an idea for a fight involving Kuja and it will come next week. Promise. Crazyswordsman 03:58, 19 September 2006 (UTC)

Since Cecil already got his turn, it's time for the two other Paladins to go head to head. It's also the first time a Final Fantasy Tactics character is on the board!

One Person: Hmm...I think I'll go with Cid, sure he's not much cooler than Beatrix personality wise but, most acclaimed soldier types aren't. But I picked Cid over Beatrix because Cid didn't bust you up to within an inch to you life (3 times even!) before he joined and he STAYED permanently Beisdes Freya already is the cool serious female soldier type of the gang and she's much cooler than Beatrix.

Progamer: I voted for TG Cid because he basically nerfed the game when I got him. When I got Beatrix SHE was the one who got nerfed -_-. I'd actually agree that Beatrix was the stronger one but that one event ruined it in my opinion. Abilities-wise, Cid can drain Beatrix's MP, Silence her with Lightning Stab and break her weapon and armor with Divine Swordsmanship. Beatrix can try Climhazard, but its worthless without a sword. She can try Holy but she's silenced and has no MP... Even without such setbacks Cid can still drain the HP from Beatrix with Night Sword.

Another cat fight? These things don't seem to end. This time, instead of two dark and mystique girls, it's two spunky ditzy bubbly girls going at it.

Yeah...sorry. Um, I don't actually hate Cara, but Relm is just SO MUCH COOLER. 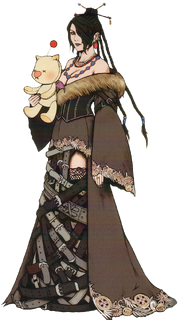 X vs X2. The original or the replacement. The gothic versus the punk. Who will you choose?

The two playable Highwinds. Maybe I should put King Tycoon and Ricard in as well at some point, heh.

S.Fawdrey What are you talking about? Cid wasn't married. Shera was his assistant. Angelus Draven - Cid would kick ass no doubt about it! And even if she was just his assistant they obviously cared for each other

It's the first Summon/Esper/GF/Eidolon/Aeon battle!

--Sephiroth7 01:38, 10 August 2006 (UTC)I'm basing this soley from FFIV, and i've got to go with bahamut. odin only hits sometimes, although its for instant death, but bahamut always does an uber amount of damage. Plus he was a lot harder for me to get. He would probably kill odin before he actually managed to hit bahamut. LOL.

Maechen 02:24, 11 August 2006 (UTC) - This was the most difficult choice for me yet. I like them both, but I chose Bahamut because he just seems to have more a significance in the series, more often an important character than Odin. Also, he's as old school as it gets, being in the first game.

User:ZeromusX Odin's great and all, but Bahamut pretty much outclasses him in every game they've both been in. They've kinda skewed both of their mythologies a bit, but meh. But my clever ten-year old self still remembers figuring out what the books in the Summons' library were really for. :]

Ultima8: I'm going for Bahamut because he is much better than Odin. Not just power, but looks as well. Heck there are even three forms of Bahamut in Final Fantasy VII. He is awesome in Final Fantasy X as well since he can hit 99999. And in the original Final Fantasy, he upgrades jobs!

FFRipper: Hands down the King of all summons would win.

Some dude: I love dragons. So I am biased.