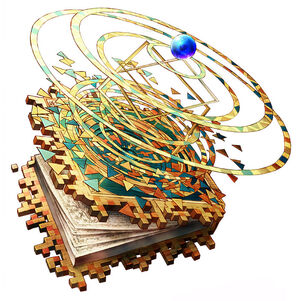 Welcome to the Gran Grimoire, where we recognise Acknowledged Users whose deeds have vastly improved the wiki. These worthy users are immortalised in verse; their works part of the tapestry of the history of the Final Fantasy wiki. Acknowledged users display the Dancing Moogle badge on their page:

Spry Espritduo
Like reflections in the sea
He gives images

spritduo has graced the wiki's pages with innumerable artworks. He has been particularly helpful in providing scans of artworks from Ultimanias, rare concept art and Japan-only books. As these are his own scans, the wiki is indebted to him for these artworks which we would not otherwise be able to obtain. Esprit has also provided translations and improved our Final Fantasy XI coverage.

The dawn's mystery
Frusion1021
He glows and is gone

rusion1021 was an early editor of the wiki who was responsible for creating most of our Final Fantasy Tactics Advance content. He also contributed to the creation of some major templates for the wiki, such as the original VfD template, spoiler template and incomplete table notice.

ecko X was one of the first administrators on the wiki. In these early frontier days, Hecko was instrumental in bringing order to the wiki through designing templates and outlining policy. He was one of the first Japanese translators for the wiki. Hecko's swift tongue and sense of humour earned him a reputation as "The Flaming Ninja", whilst his fortnightly debates with CSM (which he often won) led him to be crowned "The Shadow King" of the FF Wiki. He officially retired from the wiki in 2008, but returned several times to inject sanity into debates, before finally sailing off to blogs unknown.

The Ballad of Hecko X
Come here, around the fire we sit
To sing the story great
Of Shadow Lord, the fair Hecko
And goings of his fate.

The actions for which we clink cups
Range quite variously:
Translating; berating all fools;
Templating furiously.

A fateful day he left us
(Though a few short returns
We are joyous to remember):
Him, we are left to yearn.

So, children, warm yourselves with fire
Pour glasses great of mead,
Raise your hands heated heavenwards
To think on Hecko’s deeds!

Kokushi edits
Like rain in the spring
Once in a while

okushishin is a long-time editor of the wiki, who was instrumental in creating and editing many articles related to the job system and abilities. Kokushishin has worked quietly and steadily in the mainspace since 2006, particularly those aspects which are neglected by others.

The Magician of Many Faces

Master Conjurer
Spreads colour to the wiki
Like all the seasons

aster Conjurer created a custom theme and background image for the Wiki's previous default skin, Monaco. The Wiki had been in need of a long-awaited facelift, but had been experiencing troubles with it until MC was able to assist with her coding knowledge.

oy Al Blue was one of the earliest major editors of the wiki, at a time when most of the articles were dumped straight from Wikipedia. A tireless contributor, he began many articles for Final Fantasy I, Final Fantasy II and the Tactics games. He was the creator of Shinra News and nominated Crazyswordsman to admin.

hockstorm was one of our highly active WikiGnomes, specialising in link-fixing and other clean-up duties. He also uploaded many renders from multiple games to the wiki, in particular improving our coverage of enemies.

pira has contributed greatly to the wiki's coverage of Final Fantasy XI, and to a lesser extent, Final Fantasy XIV, through policy discussion, images and mainspace contribution. These two titles have been largely neglected on the wiki as they are MMORPGs. Spira helped codify the wiki's approach to covering the two games and tirelessly expanded our coverage.

Like a worker bee
Xion collects the honey
With wiki-gnoming

ion Valentine is one of our more mysterious users: a ceaseless contributor quietly fixing errors throughout the wiki. Xion seldom speaks, but is always around in the background, polishing the wiki into spotlessness.