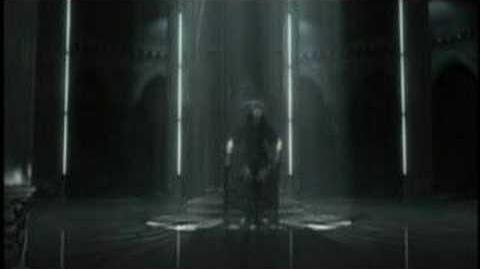 Square Enix started the E3 week with a preshow press conference at the Los Angeles Palladium concert venue.[1] Square Enix was expected to announce a new mainseries Final Fantasy game, but announcing three new games was received with surprise. The Fabula Nova Crystallis games were announced at the end of the preshow press conference with producer Yoshinori Kitase and director Motomu Toriyama presenting Final Fantasy XIII. Final Fantasy Agito XIII was shown next, and the concept of Fabula Nova Crystallis—a shared mythos between the games—was explained. Then director Tetsuya Nomura took the stage to present Final Fantasy Versus XIII.

The game was announced with emphasis that in Latin, versus means "to change direction".[1]

The trailer for Versus XIII was cinematic, whereas the one for Final Fantasy XIII was mainly done with the in-game engine. The video shows a metropolis in night time with a William Shakespeare quote, before shifting to a scene of a man, Noctis, slouching on a throne, with overlaid text explaining the setting: an isolated nation protected by an ancient line of kings, a modern civilization that by the grace of the Crystal can wield both swords and magic. As the sleeping Noctis awakes and stands up, the text explains the kingdom fights the outside world to safeguard the final Crystal, but that this is merely "a prologue to the chronicle of a new era". Noctis walks to the castle gates and finds soldiers lying on the stairs motionless, seemingly having been defeated by a vast army of enemy soldiers who stand in formation outside the castle. Noctis squares off against the machine-gun-wielding soldiers being protected from the hail of bullets by a crystalline shield. As he summons weapons from thin air to surround him, his eyes turn red. The screen fades to black and the logo for Final Fantasy Versus XIII comes up. After a brief glimpse of a sleeping Noctis on the throne, the text "for PlayStation 3" comes up.

The trailer was said to have been created by the team that had made Final Fantasy VII: Advent Children, but the game itself would be made by the Kingdom Hearts team, and was said to feature "extreme action elements" with "bonding" as the game's primary theme.[1] The trailer features a quote from William Shakespeare's Hamlet: "[There] is nothing either good or bad, but thinking makes it so." This quote was intended to evoke the atmosphere Nomura was aiming for.[2] 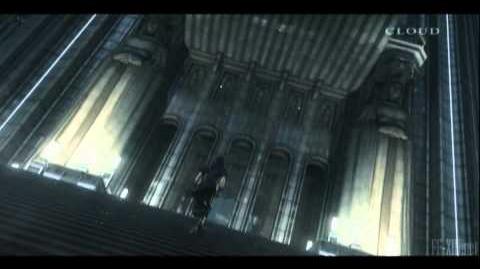 An extended version of the reveal trailer was released in 2007 on the Dengeki Cloud DVD. Noctis is shown chauffeured through the nocturnal metropolis in a car before the scene changes to the standoff on the castle stairs. This time Noctis is shown engaging the soldiers with his crystalline weapons while remaining immune to their attacks as the weapons shield him from harm. His ability to teleport is showed as well as his ability to warp to his weapons and scale a building this way.

Noctis appears in the announcement trailer with a placeholder attire designed by Tetsuya Nomura. His design was later changed with his clothes being designed by the label Roen. After the announcement at E3 2006 Nomura has been quoted as saying: "Absolutely nothing has been done on the actual scenario. However, I've had the plot worked out for some time, so you could say I'm discussing the plot and concept with the staff. However, we've yet to start actual work on the scenario."[3]

The music for the trailer is "Somnus", which remains the main theme for Final Fantasy XV, composed by Yoko Shimomura.

Elements introduced in the trailer in Final Fantasy XV[]

After the reveal not much new information on the game was given. In 2013 it was announced the game was rebranded into Final Fantasy XV and its development moved for the next generation of consoles with a new director, Hajime Tabata. It would no longer be the exact same game as announced back in 2006, would be for PlayStation 4 and Xbox One, and no longer be an official part of the Fabula Nova Crystallis series of games, although it would still retain many of the original ideas and characters.

Noctis, now the main character for Final Fantasy XV, retains many of the themes introduced in the announcement trailer. He dresses in black and uses the power of the Crystal to summon weapons from thin air and can teleport. The concept of Noctis wielding all of his crystal weapons at once was introduced to Final Fantasy XV as the Armiger, his special move or "Limit Break". Noctis can still throw his sword to a target to warp to it as shown in the announcement trailer. The Engine Blade is the first weapon that became associated with Noctis, ever since he was shown with it on his throne in the E3 2006 trailer. Tetsuya Nomura has noted that, despite having a limited amount of time to make the trailer, a good amount of time was spent designing the sword.[4]

Noctis engages the soldiers in the extended version of the trailer.

Noctis's crystal weapons shield him in the extended version of the trailer.

Noctis sleeping on the throne; a scene based on the announcement trailer.