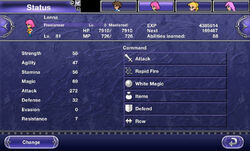 The four base values, Strength, Agility, Stamina, and Magic are the sum of the character's base stat and their currently equipped job's stat. For instance, if Bartz is a Knight, his Strength will be his base stat (28) plus the Knight's base stat (23), for a total of 51 Strength. Certain abilities also guarantee a Magic increase (for instance, if a Monk has White Magic equipped, White Magic will increase their Magic stat, improving their ability to heal). The larger of the two values is used. When a job is mastered, its stat increase will be transferred to the Freelancer and the Mime, but none of its lower stats will, making these two jobs' stats the highest stats of any job mastered (meaning mastering Monk or Gladiator will increase that character's Freelancer's Strength by 26 more than the Freelancer's base stat, but will not reduce Magic).

Each party member has slightly different base stats as Freelancers, giving them a small edge over other party members in different respective jobs. For example, Bartz's higher Strength can make him slightly more suited to fighter jobs, while Lenna's higher Magic can make her a slightly better spellcaster. These differences are minor enough that they do not need to be adhered to when crafting teams, but can help players choose which job to master for which character.

Once a party member gains enough experience, they will level up. The maximum level is 99.

The HP stat shows how much health a character has left. Once it reaches zero, a character reaches KO status. Party members are capped at 9999 HP while enemies are not.

It can also be increased by the abilities of some jobs, such as Monk's HP +30%, gained when mastering the job.

The MP is a measure of how many spells, which require MP, can be cast. Characters are capped at 999 MP while enemies are not.

It can also be increased by the abilities of some jobs. Gold Hairpin headgear halves MP costs of spells on the wearer.

The Strength stat determines the damage dealt by physical weapons and unarmed attacks. The effect it has on overall damage varies by the weapon equipped, and for enemies, varies by their attack multiplier.

The Agility stat determines the speed at which a unit's Active Time Battle bar fills up (along with Weight for characters). Additionally, it contributes to the effect of many ranged physical weapons (such as bows) and throwing attacks. Whether it affects the damage dealt by physical weapons, depends on the weapon equipped.

The Stamina stat is a character-exclusive stat that helps determine their HP, as well as the rate of Regen, as follows:

The Magic stat helps determine the damage dealt or amount healed by spells (such as White Magic, Black Magic, Time Magic, Summon) as well as the physical power of rods, staves, and bells. It also helps determine a character's MP.

The Attack stat helps determine the amount of damage done by a physical attack. For characters, it is determined by the currently equipped weapon.

The Defense stat reduces the damage dealt by physical attacks. For characters, it is determined by the currently equipped armor and accessory.

The Evasion stat determines the chance that a unit will dodge an attack. For characters, it is determined by the currently equipped shield. Weapons like the Main Gauche and accessories like the Eleven Mantle also increase evasion but don't stack.

The Magic Defense stat reduces the damage dealt by magical attacks. It is a character-exclusive stat determined by the currently equipped armor and accessory.

The Magic Evasion stat determines the ability to block a magic spell. It is a character-exclusive stat determined by the currently equipped armor and accessory.

The Weight stat is a character-exclusive stat that amounts to the total weight of armor and accessory equipped. Along with Agility, it affects how fast the Active Time Battle bar fills up (8 weight = -1 agility). In the Pixel Remaster, the weight formula was change to (4 weight = -1 agility).

The Magic Defense stat is an enemy-exclusive stat that reduces damage dealt by magical attacks.

The Magic Evasion stat is an enemy-exclusive stat that determines their ability to block a magic spell.

The Attack multiplier stat is an enemy-exclusive stat that helps determine the physical damage dealt, along with Strength and Attack. Each enemy is assigned their own multiplier.

The Magic multiplier stat is an enemy-exclusive stat that helps determine magical damage dealt, along with Magic. It is based on their LV and Magic stat.

EXP Up is a Level 2 ability found in the Advance and the now defunct mobile and Steam versions, and is part of the Cannoneer class. The ability allows characters to gain 1.5x more EXP after battles, and requires 150 ABP to master.

Awarded after battle, ABP will increase the job level for the equipped job, allowing them to unlock new abilities and eventually master the job. Unlike EXP, it is not tied to defeated enemies, but to defeated formations of enemies.

ABP Up is an ability learned from the Oracle class (only in the GBA and the now defunct mobilw and Steam versions). It is the Level 3 ability and takes 150 ABP to master. It allows the equipping character gain 1.5x the amount of ABP after battle. The effect doesn't stack when selected multiple times on the Mime class.

The following lists the multiplier for HP and MP of party members (which calculates their HP based on this and their Stamina and Magic stats respectively), and the EXP required to reach each LV: