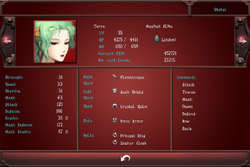 The following is a list of stats in Final Fantasy VI. Stats apply to both party members and enemies.

The characters' stats—with the exception of HP and MP—do not rise on leveling up, but are instead boosted by equipping weapons, relics and magicite. Magicite permanently increase a stat on level up, while the others increase them when equipped. The Cursed Shield reduces all stats by 7, with the exception of the Defense, Evasion, Magic Defense and Magic Evasion, which it increases by 0.

A list of party member stats can be found below.

Once a party member gains enough experience, they will level up. The level stat is used in damage calculations for magic and physical damage sources, but does not increase stats. Levels play an important role in a few spells: namely Lv.5 Death, Lv.4 Flare, Lv.3 Confuse, and Lv.? Holy while Dischord can halve the target's level.

When a character joins the party, their level is calculated based on the average level of the current party members. The new character's level equals the average of all current members' levels rounded down. If a character rejoins in the World of Ruin, the new level will never be lower than their old level. If a character is joining for the first time, a value is added to the average party level to determine their new level.

The HP stat shows how much health a character has left. Once it reaches zero, a character reaches KO status. Party members are capped at 9999 HP while enemies are not. The 0 HP character bug allows players to keep a character alive with 0 HP, thus becoming invincible unless healed.

The MP is a measure of how many spells that require MP can be cast. Some enemies, and Gau when in some Rages, die when it reaches 0. Characters are capped at 999 MP while enemies are not. The stat is subject to couple of bugs.

Though few relics increase MP, several reduce the MP cost of spells. Gold Hairpin can halve it, while Celestriad can reduce it to 1 MP cost to all spells.

Also known as Vigor, the Strength stat increases damage done by physical attacks. The stat's boost caps at 128; although it can be raised to up to 255 Strength, any stat above 128 will have the same effect as a 128 Strength stat. The Strength stat is squared and added to the Attack stat when calculating a physical attack's damage, which also takes the attackers' level and other factors into account.

Enemies do not have set Strength stats, rather, their Strength is determined randomly at the beginning of battle, and is between 56 and 63.

Strength can be boosted by equipping certain weapons and relics and mastering certain magicite. A few pieces of armor also boost the strength stat. All characters' strongest weapons from Dragons' Den grant a moderate strength boost.

Speed increases the rate at which the ATB gauge fills. It can be increased only by Odin and the Cactuar magicite. The Speed stat +20, in addition to any Haste or Slow status, will add to the equation determining that rate at which it is filled; these statuses are calculated independently of the Speed stat.

Stamina increases the chance to survive against Death attacks, the amount they are healed by Regen, the amount of damage dealt by Poison, Sap, and HP Leak, and the amount of healing per step done by Tintinnabulum.

Like Strength, enemies do not have a Stamina stat, but it is not randomly selected. In its place, it is calculated as follows:

If the above calculation exceeds 40, the number becomes 40 instead.

Also known as Mag.Pwr, Magic increases damage done by magical attacks. Unlike Strength, it can exceed 128. It is multiplied with the magic spell's power and the users' level into account when calculating damage. Sabin's Blitzes use his Magic stat for damage calculation.

Also known as Bat.Pwr, Attack is based on weapons equipped, along with the in-built battle stats of enemies and characters. It increases damage dealt by physical attacks, adding to the damage calculation equation with Strength and the level.

Magicite, armor and relics do not increase this stat.

Defense reduces the damage dealt by physical attacks, factoring negatively into a damage modification of the damage calculation at the end. The modification is ignored if the attack is Defense-ignoring.

The +1 at the end ensures that an attack never deals 0 damage, and can always deal at least 1 damage.

No magicite or weapons increase Defense.

Also known as Evade %, Evasion can increase the chances of an attack missing.

In the original SNES release, Evasion was bugged and did not work, with Magic Evasion working in place of it; this was rectified in the Advance release and Evasion now works for physical attacks.

No magicite increase Evasion, but several weapons do.

Also known as Mag.Def, Magic Defense functions identically to Defense in the calculations, but for a different type of damage.

Magic Evasion, or MBlock%, increases the chance of a magic attack failing to connect.

In the original SNES release, Magic Evasion was calculated in every single equation determining hit and miss chances and Evasion was redundant, but this is rectified in later releases.

Hit Rate is used to reduce the chance of an attack missing. This stat only applies to enemies. If the Hit Rate multiplied by the block value (determined by either Evasion or Magic Evasion) and divided by 256 is greater than a randomly generated number between 0 and 99, then an attack connects; if the Hit Rate is 255, it always connects.

Also known as Exp. Awarded after battle from defeated enemies, EXP will increase a characters' level. Equipping the Growth Egg will double the amount of EXP earned from battles. Boss battles do not reward the player with EXP.

Awarded after battle, the Magic AP allow the character to learn spells of their equipped magicite or equipment. Unlike EXP, it is not tied to defeated enemies, but to defeated formations of enemies.

Escape Success is a hidden stat that determines the ability for the character to escape. It determines how quickly each character escapes individually (as each character needs to escape on their own, unlike many other games in the series, until no one on the screen is left), with the exception of side attacks where the value is 0 and is ignored.

The evolution by levels is as follows:

The following lists the raw stats that characters start with: 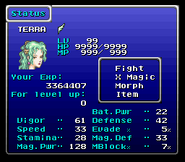