Shinra uses a military transport helicopter to deploy SOLDIERs and Turks to missions in Crisis Core, Advent Children, and Final Fantasy VII Remake . The Turks use it for transport and aerial offense. Shinra medical team uses it for extractions, and Avalanche HQ is also seen using a similar one. The medical helicopter is red and white, whereas the others are metallic colored. The Turks' helicopters have the Shinra Electric Power Company logo

The Motonox Gust is driven by Cloud and Wedge during Final Fantasy VII Remake chapter Mad Dash to get topside from the slums. Before this, Cloud can spot a man in the slums with one.

Similar to how Hardy-Daytona was based on real world motorcycles, the Motonox Gust appears to be based around dual sport motorcycles (akin to a Honda XR605L or a Suzuki DR-Z400S). The segment takes cues from the motorcycle minigame from the original Final Fantasy VII where the player swats Shinra bikers with their sword while trying to avoid damage to both Cloud and to Wedge. The boss of this segment is Roche.

The sA-37 is the other motor tricycle. It is called Shinra Hauler SA-37 in the remake. This one is used by Barret and the other party members when they escape from the Shinra Building and is part of the following minigame segment. If the enemy motorcycles hit this car, then the party takes damage. That damage will be represented in the battle with Motor Ball in the original Final Fantasy VII.

The Shadow Fox is an all-terrain, multi-purpose truck developed and used by the World Regenesis Organization which saw great use during the conflict against Deepground. Unlike most other vehicles seen in Final Fantasy VII (or its compilation), the Shadow Fox appears to be powered by hover technology. Similar to the aesthetic of Final Fantasy VII, the truck appears to be based on real world military troop transport vehicles, such as the Praga V3S. 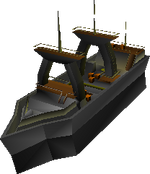 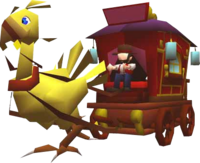 The chocobo cart morphed into Sam's Delivery Service in the remake.

WRO Skyboard for Dirge of Cerberus.