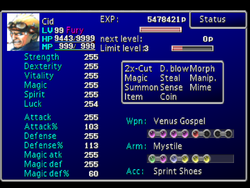 The following is a list of stats in Final Fantasy VII.

This is a comparison of table of how much Exp is needed to achieve the given level.

The LV, or level, improves almost all of the units' attributes. In addition to determining stat growth, it improves physical damage, magical damage, chance to hit with magical attacks, chance to land critical hits, chance to steal, and the chance to manipulate. LV is also an important factor in many Enemy Skills.

HP is the unit's health. At 0 HP a party member is knocked out. A variable amount of HP is gained by leveling up. HP can be boosted by equipping the HP Plus Materia. Equipping Magic and Summon Materia lowers the party member's HP and Strength, but they gain MP and Magic Power in return.

Usually HP can only be lost in battles, but in Cave of the Gi and Ancient Forest some traps exist as field elements that lower HP if triggered. HP can be restored via items, curative magic, enemy skills and Limit Breaks, and by linking HP Absorb Support Materia with another command and using said command to gain 10% of the damage inflicted as HP.

MP determines how many spells a character can cast. Enemies' MP can be reduced using Magic Hammer or Barret's Mindblow Limit. MP can be restored with items and MP Absorb Materia attached to any ability. Turbo MP raises its linked Materia's MP cost in exchange for empowering them. Red XIII's and Cid's ultimate weapons deal more damage the closer to maximum their MP is.

Primary stats are mostly used to determine the derived stats, which are mostly used in damage calculations to determine battle outcomes, damages and resistances. Dexterity and Luck are notable exceptions, as they are frequently used in battle calculations. Determined stats are typically determined by levels and stat boost items, though certain pieces of equipment can also add boosts.

Vitality, when added to the bonus from the equipped armor, determines the Defense stat, which reduces physical damage taken.

Magic, when added to any equipment boosts, determines the Magic atk stat.

Spirit, when added to equipped armor and other bonuses, determines the Magic def stat.

Unlike other primary stats, Luck does not determine an externally derived stat directly, but is an important feature in many calculations. It affects the chances of attacks hitting or missing from allies or enemies, and for attacks to be critical hits.

Derived stats refer to the character stats determined by primary stats. These stats, along with two of the primary stats (Dexterity and Luck), are what end up in battle calculations. On enemies, as they do not have primary stats or equipment, these are pre-determined.

This is then altered by the ability power (if a magic, enemy or Command Materia attack) and reduced by the Defense, among other things. If the attack is a normal physical attack, the power value is treated as "1" and does not affect the base damage.

Attack% determines the chance that an attack will hit, and on party members is derived from the Dexterity and equipment. This stat applies not just to units, but also to individual enemies, as non-attack abilities have their own Attack% stat. An attacker with 255 Attack% does not necessarily hit, as Attack% is only one stat that is used in the calculation determining the chance of a hit:

Other ways of reducing magic damage taken include Barrier and similar spells.

Defense% determines the chance that an attack will miss, and on party members is derived from the Dexterity and equipment. This stat only applies to units. It is used to reduce Attack% and comes later in the calculation:

Magic atk is the equivalent of Attack for magical attacks, and features in the formula determining damage from magical attacks alongside the ability's own ability power and the attackers' LV. On party members, it is determined by equipment and the Magic stat.

This is then altered by the ability power (if a magic, enemy or Command Materia attack) and reduced by the Magic def, among other factors.

The final formulae is:

For example, Knights of the Round's Ultimate End attack has a power of 80, so it would do 5x base damage per hit. Linking an All Materia to single target Magic Materia (such as Fire Materia) incurs a 1/3rd damage penalty, but attacks that originally hit all enemies (such as all summons and spells like Ultima) will not incur a damage penalty.

Other ways of reducing magic damage taken include MBarrier and similar spells.

Magic def% determines the chance of avoiding a magical attack entirely. It is a straight percentage chance and determined by equipment or the enemies' pre-determined stat.