Square Enix Game Books Online
The Final Fantasy VII series Special Book is a short 16 page booklet featuring a timeline of all Final Fantasy VII-related entries. It was published on January 31, 2020 under SE-Mook, and was sold with a Compilation of Final Fantasy VII tote bag. Each entry is given a brief summary and ample image illustrations. Titles with storylines feature a paragraph story summary and "Character File" segments feature short bios for the main characters of titles. 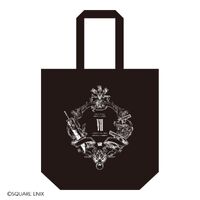 The design of the tote bag is explained on page 15. The tote bag design was supervised by Tetsuya Nomura and incorporates elements from each title, featuring (clockwise) the Cerberus emblem, guns, the Cloudy Wolf emblem, and the Buster Sword. The center lists "Crisis Core", "Before Crisis", "Advent Children", and "Dirge of Cerberus", with a large "VII" Roman numeral in between them. The Compilation SOLDIER logo sits below the text.