This is a list of official Square Enix merchandise available for the Compilation of Final Fantasy VII. For a generic list, see merchandise.

Seven Final Fantasy VII figures were released by Bandai in 1998. The figures comprise Cloud, Aerith (with a Chocobo), Barret, Red XIII, Tifa (with a Frog), Vincent, and Sephiroth, and are numbered I through VII respectively. The packaging for the first three characters in the series indicate that a Cid figure was initially planned, however it was never produced.

These were released in Japan and, a bit later, internationally. The packaging of the international line differs only slightly, retaining Japanese text in most places. An easy way to distinguish between versions is that the "Extra Knights" logo in the top right corner on the front of the Japanese packaging has been replaced by a black "WARNING: Choking hazard" box in the international, while on the back, the warnings on the lower third are fewer and written in English instead of the original Japanese. Though the same molds were used for both releases, there is a notable decrease in paint detail in the international, with several subtle differences and omissions apparent upon close inspection -- perhaps most notably being the complete absence of Barret's left-arm tattoo.

Three Final Fantasy VII: Advent Children figures were released by Kotobukiya in the end of 2005. The figures are sculpted by Takayuki Takeya and are Bahamut SIN, Shadow Creeper and the airship Shera.

An amiibo figurine based on Cloud Strife will be released on July 21, 2017. The amiibo will be compatible with Super Smash Bros.. 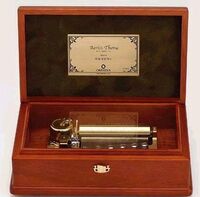 One of the rarest, if not out-right the rarest, pieces of Final Fantasy merchandise is the limited edition Final Fantasy VII music box that plays "Aeris's Theme". It has a gold plaque that says "Aeris's Theme" and its limited number. Only 100 pieces were ever produced by Sankyo Orpheus Japan. This music box has 50 notes whereas most music boxes have only 18 and the box is made out of curubixa wood.