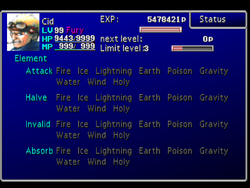 The following is a list of elements in Final Fantasy VII. The element of one's attack determines the damage it deals depending on the target's weakness or resistance; if the target absorbs the element of the attack, they gain health rather than lose it. Many Summon and Magic Materia have innate elements that apply effects on the wearer when coupled with the Elemental Materia.

One of the earliest accessible elements. It is the progenitor of the Fire line of spells. Flare is another fire-elemental spell. Its summons are Ifrit and Phoenix, and its Enemy Skills are Flame Thrower and Beta. When Vincent is in Galian Beast form, he may use the fire-elemental Beast Flare. Kujata, Typhon, and Magic Breath also make use of it.

Fire is most useful against Ice enemies.

It can be protected against using the Fire Armlet or Fire Ring, among other equipment.

One of the two initial elements the player can access, as Cloud comes equipped with two elemental Materia. It is the eponymous element of Ice spells. Freeze is another ice-elemental spell. Shiva is its summon and is the first elemental summon available. Kujata, Typhon, and Magic Breath also make use of it.

Ice is most useful against Fire enemies.

It can be protected against with the Aurora Armlet and Ice Ring, along with other methods.

One of the two initial elements the player can access, as Cloud comes equipped with two elemental Materia. Its standard spell line is Bolt, its summon is Ramuh, and its Enemy Skill is Trine. When Vincent is in Death Gigas form, he may use the lightning-elemental Livewire. Kujata, Typhon, and Magic Breath also make use of it.

Lightning tends to work well against machines and aquatic enemies, making it useful for the prolific amount of machines in the early game.

It can be warded with the Bolt Armlet and Bolt Ring, among other means.

The element is accessible after leaving Midgar. Final Fantasy VII expanded Quake into a full line of damage spells. The Break spell and Yuffie's Limit Landscaper are earth-elemental attacks. Titan is the summon representative. Typhon also uses it in its attack.

Earth misses against most flying enemies, and due to the mechanics of the elemental system, so will any multi-elemental attack with Earth as a component.

Quake spells hit the hardest of all standard elemental spells.

Earth can be guarded with the Escort Guard, which can only be worn by men, and Tetra Elemental, which also guards against Fire, Ice, and Lightning.

The last element obtainable before leaving Midgar. It is closely linked with the Poison status. Bio is a full line of spells and while there is no dedicated summon, Hades inflicts various statuses, including Poison.

Bio is useful for its ability to both inflict Poison and because it does more damage than Fire, Ice, or Bolt, though less than Quake.

Poison can be defended against using various accessories and other methods, including the Star Pendant, Ribbon, and Poison Ring.

Gravity lends its element to the Demi line of spells, expanding it to three tiers. It deals damage based on current HP, as well as enemy resistance. This means that an enemy weak (double damage) to Gravity can be immediately killed with Demi2. Barret's Limit Mindblow and the Enemy Skill Laser are also gravity-elemental.

The Minerva Band can defend against Gravity.

Like Wind, Water lacks a proper spell line, but it does have a summon, Leviathan. The powerful Enemy Skill Aqualung provides reliable access to Water damage once gained.

Water can be defended with the Water Ring and other methods.

Wind proves effective against many flying enemies. Adding it to a Long Range attack can be useful for certain enemies.

Because of the story importance of Holy, the Holy ability is not available to the player. The only means of inflicting Holy damage in the game is Alexander, and there are no Holy enemy abilities.

Both the Minerva Band and Ziedrich defend against the Holy element, although the former can only be worn by women. The only time this would come into play is if the player or a confused character turned a Holy attack onto the party.

A special curative element, it is unique among the magical elements in that no Materia has it as an element, including Restore. Using Restorative spells against undead enemies causes them damage due to them having a positive resistance value. Most units in the game are set to -100% (Absorb), which causes Restorative magic to heal them. The standard lines of spells are the Cure and Life lines, with Regen offering a notable special case.

Restorative as an element cannot be resisted, but it is impacted by MBarrier status like any other damage, which reduces healing damage as well as normal damage. The Ziedrich, notable for protecting against nearly all damage types, does not reduce Restorative damage.

Never officially named, and also referred to as the "10th Element." While the original Japanese version had several enemy attacks using it, later versions reassigned the elements for all of them that do damage, with the notable exception of Ultimate Weapon's Ultima Beam. Aeris's Limit Breaks also use it.

The element can be defended by pairing an Elemental Materia with a Materia which does not possess an element. Unlike the physical damage types, the Ziedrich does not protect against it.

A physical damage type associated with blades and slashing. It is the sole damage type for Cloud's weaponry and is also possessed by a few of Barret's and one of Cid's.

A physical damage type representing piercing attacks, as "to punch a hole." It is the damage type of most of Cid's weaponry, and both Barret and Tifa have three weapons which have it. In particular, it is used for Tifa's claw weapons.

Physical damage types generally have no enemies which are weak or resist them, and can all be resisted through the same means, making them mostly superfluous. However, some enemies, such as the Sahagin and Desert Sahagin are automatically hit by Punch attacks, with no chance to evade.

A physical damage type associated with ranged attacks, and closely linked to the Long Range property. It is the sole damage type for Vincent and Yuffie's weaponry, the damage type of most of Barret's, and is possessed by one of Red XIII's.

Physical damage types generally have no enemies that are weak or resist them, and can all be resisted through the same means, making them mostly superfluous. However, the strong connection between Shoot and Long Range make this damage type particularly useful for the party, as it allows party members to attack with the same damage from the back row and to hit out-of-reach enemies.

The final physical damage type, which represents sonic attacks, though most of these have energy-like animations. Notable examples include Cloud's Blade Beam Limit Break and Ruby Weapon's Ruby Ray. Despite Cait Sith using megaphones, they do not deal this damage type, as the attack comes from punching on command for Hit damage rather than attacking the enemy with the sound.

No enemies have an affinity with Shout, and it is the only of the physical elements that Ziedrich does not halve.

Some enemies also have an "elemental" weakness to non-elemental effects, specifically status effects. Attacks utilizing these statuses will behave just like an elemental effect in these cases, even if the enemy is immune to the status. These have no bearing on the party.

Confusion can be applied to a weapon attack by pairing Added Effect with Mystify, Contain, or Hades.

Sleep can be applied to a weapon attack by pairing Added Effect with Seal or Hades.

Death can be applied to a weapon attack by pairing Added Effect with Destruct or Odin.

Frog and small can both be applied to a weapon attack by pairing Added Effect with Transform or Hades.

Silence can be applied to a weapon attack by pairing Added Effect with Seal or Hades.

This section is empty or needs to be expanded. You can help the Final Fantasy Wiki by expanding it.
Elements
Final Fantasy VII
Community content is available under CC-BY-SA unless otherwise noted.
Advertisement