Equipping weapons will affect your physical and magical attack stats. Furthermore, each weapon comes with its own unique ability that can be used when the weapon is equipped. You can also set materia to a weapon which will give you access to a variety of abilities.

This is a list of weapons in Final Fantasy VII Remake. They are listed in the order they appear in the menu if sorted by type.

Each weapon in Final Fantasy VII Remake boosts attack power and magic power when equipped, has an associated number of materia slots, as well as associated weapon ability that the character can use by equipping it. This can be learned permanently by maxing one's proficiency with the weapon. Weapons can also be upgraded with SP to unlock several weapon passives that boost its attributes, materia slots, or provide other certain abilities.

All weapons have different materia growth. At Weapon Level 6, each weapon achieves six slots with three pairs of linked slots, but the number of upgrades required to reach this varies.

Each weapon in Final Fantasy VII Remake boosts attack power and magic power when equipped, and has an associated weapon passive that the character can use. Using a weapon ability repeatedly increases its proficiency; once this is maxed, the character learns the ability permanently, and can use it without needing to equip the weapon.

SP (skill points) can be allocated to a weapon to unlock its skills, boost its stats, or improve its materia slots. Once a weapon levels up, a new core is added and more skills become available. Special items called manuscripts can also be collected through sidequests and other means, which grants a character 10 SP.

Each weapon has a different number of initial materia slots, and with upgrades, the number of slots grow. At Weapon Level 6, all weapons have an equal number of slots at six slots with three pairs of linked slots, though how many upgrades are required to reach this depends on the weapon. 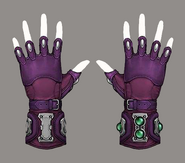